So, the ceasefire was not renewed, and the war goes on. For how long?

Last night was very restless. Once every hour or two we got up to listen to the radio and look up Israeli and Palestinian and international news websites. There were many rumors and speculations and few pieces of hard news, but past midnight it had become clear that the negotiations in Cairo had collapsed. Or perhaps they had  never been real talks, but rather a  joint Israeli-Egyptian effort to impose terms  which Gazans in general and Hamas leaders in particular found completely unacceptable.  And now the government of Israel declares that it will not negotiate under fire, that the fire must cease in order to make it possible to talk the conditions under which the fire may cease.

Israelis were rather flabbergasted, having been reasonably certain that Operation Protective Edge was over.  More than half of all Israelis consider it to have ended with a draw. With this draw having included 64 dead soldiers, the public did not seem too sanguine about wanting it to continue. Dozens of newspaper articles summed up the military and political and economic and psychological aspects of the war. Economists concluded that war expenses could be covered without major dislocation, if there is no further crisis. The mass circulation papers were preparing to have a few more days of the “Love Our Boys in Uniform” campaign – and after the weekend  the normal staple of gossip and scandals was going to resume. So how dare the  Palestinians, who had already taken such a terrible beating, overturn everything and decide that the war is not over yet?

A few days ago former Knesset Member Yehuda Ben Meir - once an outspoken hawk and nowadays a rather mainstream commentator - made an effort to convince Israel’s citizens that they had indeed won the war: “After a month of fighting, Hamas agreed to a 72-hour cease-fire without preconditions; that is, it accepted the original Egyptian diktat – first a cease-fire and only then a discussion on the sides’ demands. The very fact Hamas has agreed to one without getting anything in advance – completely contradicting its stance for about three weeks – is tantamount to a harsh defeat. This isn’t the running of a white flag up a pole, but it’s definitely the raising of one, at least to half-mast”.

Three days later these words turned out to be, at the very least, premature. Rather than a white flag to half-mast, Israel finds itself facing a Hamas determined to go on fighting and holding up a battle flag inscribed with the words “The Port of Gaza”.

Upon their arrival in Cairo, the Palestinians had been informed by Egyptian security chiefs – speaking on behalf of Netanyahu – that the very issue of opening Gaza’s sea port (and airport) is “not on the agenda”. Netanyahu did offer some easing on the movement of goods from Israel into Gaza, some increase in the distance which Gazan fishing boats may move from shore before being intercepted by Israeli gunboats. In short – a bit of improvement in the prison conditions under which a million and eight hundred thousand Gazans are held, but by no means any change in the basic situation of their being held imprisoned by the two closely colluding warders, Israeli and Egyptian, who control all their access to the outside world.

It seems that Gazans would have to fight – and fight hard – in order to gain an open sea port, by which they could start building up their own direct relations and contacts in the wider world and break free of Israel and Egypt alike. A true War of Independence, though no one uses the term. And so, the war is once again escalating, as I write this.

On the second night of the 72-hour ceasefire, we were walking along a side street in a city which had emerged without a scratch from a month of war, thanks to the Israeli technological ingenuity and the American taxpayers’ money which had gone into Iron Dome. There was suddenly piteous mewing. A stray kitten was crying his heart out, under a parked car. About a month old, the time when mother cats stop caring for their children and they have to take care of themselves. Not all of them survive. There was an all-night shop nearby which sold milk, and the sympathetic young attendant provided a small plastic bowl which we placed as near the kitten as we could.

When coming home half an hour later, there was waiting on the computer a harrowing report published in the Christian Science Monitor and sent by an American friend. A detailed eyewitness report of what happened in the neighborhood of Khuzaa between July 21 and 25. The unimaginable gulf separating the two sides of this terribly unequal war.

“Faten Qdeih and her six children had fled Israeli shelling of their home. Her seven-year-old son Anas dashed outside in fear just as another strike landed. Qdeih followed him and found his lifeless body. (…)  A group gathered, and men took off their shirts and shoes to avoid being mistaken for militants. The men  raised white cloths and yelled “peaceful!” as they walked. “We were not expecting to get out alive”. (…) Wael Abu Erjala says he'll be haunted by a boy, dying in the street and calling for help. “I was carrying my aunt so I couldn't go to him… I don't think I'll ever sleep after what I saw.”

Are we going to have more of this in the coming days? On this first day after the resumption of fighting, “only” five Gazans were killed, a far cry from the three-digit death toll which characterized the days of last week – which is no guarantee of anything. But possibly, the outcry at the terrible things broadcast from Gaza to TV viewers worldwide, though not in Israel(!), might have some deterrent effect on the political and military decision makers. Also the firm words of the UN Secretary-General, and the incipient moves towards war-crimes charges.

CHANGE DIRECTION - NO TO THE WAY OF WAR
Change direction – move towards peace!

The next round of fighting can be prevented.

No to the way of wars - we must have a political solution!

On Saturday, Israel’s Peace Camp will rally at the Rabin Square.

After an agonizing month of war and death, in face of mounting waves of incitement and hatred which increasingly tear up the Israeli society, we stand up to demonstrate for peace and for democracy.
The next round of fighting can be prevented. It is far from inevitable that we continue the descent into an abyss of ever more cruel wars, of extreme hatred and the destruction of our neighbors and of ourselves.

There is another way: an immediate dialogue with the Palestinians – for a fair peace and for the reconstruction and opening of Gaza; a determined joint stand of Jews and Arabs against racism; a struggle for a future of Life.

Only a political solution of two states, Israel and Palestine side by side, will ensure independence, justice, security and hope for all who live in this land.

On Saturday night we will stand together – Jews and Arabs, residents of the South and of the whole country. Together we will call for an end to the cycle of bloodshed. The next war can and must be prevented, Israeli society should be healed. 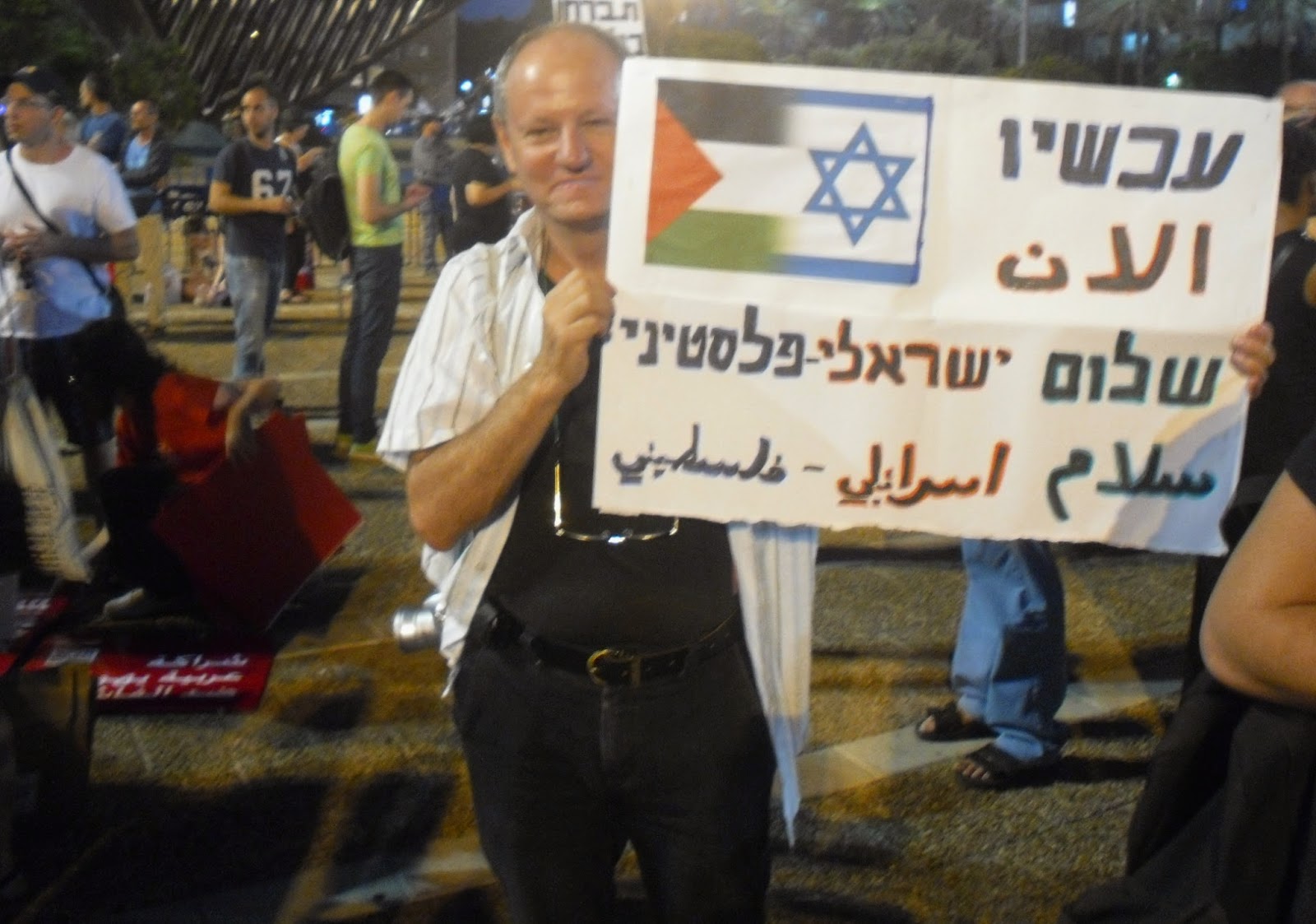