Fifty days. Seven weeks and a day. No doubt, many wars in history had lasted longer than that, and there had been worse horrors than what happened in Gaza. "We did it in the least terrible way possible" says today the IDF Chief of Staff Benny Gantz. Still, terrible it was.

Throughout  these fifty terrible days, it was the Coalition of Women for Peace  which assumed the task of keeping alight the flame of opposition to the war. To organize demonstration after demonstration, protest after protest – sometimes  in collaboration with others, sometimes alone or almost alone when no other partners appeared. Also last Saturday night we joined their call for a protest march in central Tel Aviv, from the Habima Square and along Ben Zion Boulevard. To the sound of drums and the chants of "The government’s lies/bring no security!", "Occupation is terror / PR will not help!", "End the killing, no more bereavement / the siege must end! "," In Gaza and Sderot / children want to live!". There was virtually no sign of the extreme right thugs who attacked protesters at the early weeks of the war. Only one tomato thrown near  the end of the protest signified their presence. 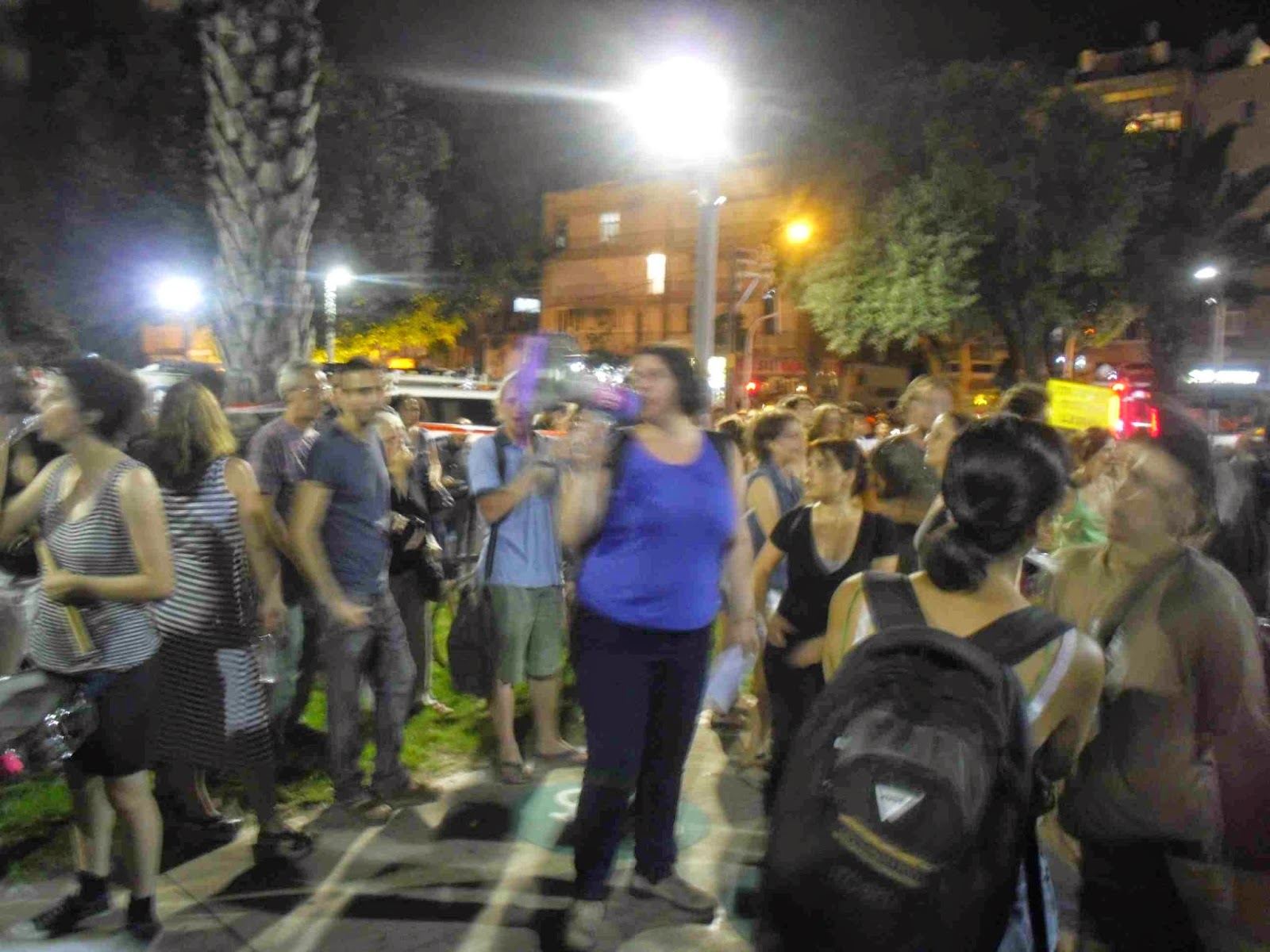 "In Gaza and Sderot / children want to live". This is quite a well known slogan. We have been hearing it on the streets for at least five years, every time that the southern border flared up. But never before was it so relevant and poignant. Never before those terrible fifty days had there been so many children who wanted to live, who very much wanted to live and whose lives were nevertheless cut off. The exact number is still being debated, but certainly there were more than five hundred children killed, some of them along with their parents and entire family. Thousands more of wounded children, some of whom will remain physically disabled for life, all of them will bear a trauma.

The sudden ending of the earlier ceasefire, the one which lasted five days, was  accompanied by an attempt to "liquidate" Mohammed Deif, head of Hamas' military wing – in recent months, the man which Israelis most loved to hate. " Deif had nine souls and avoided earlier attempts, but the Israeli Security Service discovered his weak point - the longing for his family, and used it to set him a lethal trap" bragged the well-known commentator known Alex Fishman on the pages of "Yedioth Ahronoth." The security services of Israel and discovered that Deif’s wife Widad and his eight month old son Ali would be in a “safe house” at  the Sheikh Radwan neighborhood of Gaza - and assumed that the husband and father will be there, too. Israeli Air Force planes dropped no less than five bombs, weighing a ton each, to make sure the entire house will be destroyed and no one in it would possibly stay alive. Haggai Segal, who once served a prison term for attempting to assassinate Palestinian mayors on the West Bank and is now the editor of the right-wing “Makor Rishon” paper, congratulated the army and security services for having overcome moral scruples and taken the conscious decision to kill the mother and her child.

Two days after this affair, the four-year old Daniel Tregerman was killed when hit by a Palestinian mortar shell, while playing at his home in Kibbutz Nahal Oz near the Gaza border. His tragic death was the main topic in the Israeli news media, and on all the front pages was a photo of the smiling boy whose in his life was so suddenly cut short. Prime Minister Netanyahu said that "Hamas will pay a heavy price for this harsh terrorist attack", and the US Ambassador to Israel sent his condolences .

Hanoch Daum, a veteran columnist who lives in the West Bank settlement of Elazar, wrote, "We are going to win this war, because we sanctify Life while our enemies revere Death. Look how deeply an entire country mourned little Daniel, as if he were a family member to all of us."

One day after the death of the child Daniel Tregerman, there was a Facebook message from John Brown - the pen name of a veteran activist from Beersheba: "In the past 45 days, the IDF is on average killing every two hours  a child under the age of 15 in Gaza. In the past few hours it seems to be a bit above this average. Tanzim Judeh and her three children Ra'ad, Rawiya and   Osama were killed east of Jabalya. They were probably been directly, as the children’s bodies completely disintegrated. A bit earlier the one and half year old baby Bilal Abu Takiya was killed in the northern Gaza Strip ".

The State of Israel does not (yet?) censor Facebook, and anyone can write whatever pleases them, However, the above names have not been published in  Israeli communications media except for "Haaretz". Those who get  their information from *the* more widely circulated media outlets have never heard those names. At the beginning of the war, the B’tselem Human Rights organization tried to publish on the radio, as paid ad, the list of names and ages of Palestinian children killed in Gaza (the list was still much shorter...). The Broadcasting Authority rejected the request, and the Supreme Court upheld this decision, the judges stating that "Publication of the names of the dead children would not constitute the providing of objective information to the public - it would be a political statement."

Seventy years ago, when Zionist Jews in this country had yet to create a state, they established underground movements which waged an intense struggle against  the British Mandate authorities. The most radical of these was Lehi (Fighters for the Freedom of Israel). Lehi leader Yitzhak Shamir survived the years of struggle against the British and ultimately became Prime Minister of Israel. At official memorial ceremonies,  Lehi veterans still their organization’s  anthem, "Unknown Soldiers":

Unknown soldiers are we, without uniform,
Around us horror and the shadow of death.
We were all called up for life,
Death is our only discharge.

In red days of riots and bloodshed,
In the black nights of despair,
In the cities and villages shall we raise our flag,
On which are inscribed War and Conquest.

"Unknown Soldiers" has five stanzas in all. But in recent years, official ceremonies in which it is sung usually do not come up to the last and concluding one:

The tears of bereaved mothers,
And the blood of pure infants
Shall be mortar for the cadaver building blocks
Of which the edifice of the Fatherland shall be erected.

***
During the fifty days of “Operation Protective Edge”, the Peace Bus had travelled several times from Jerusalem to the Gaza border, on the initiative of activists calling for an end to war and bloodshed and collecting humanitarian aid for the residents of the Gaza Strip. Following what we all hope is the end of this war, they have called for a Day of Mourning to commemorate all who perished in the conflict, Israelis and Palestinians alike. The Peace Bus stopped on its ride today at four points: The IDF Square on the borderline between East and West Jerusalem, between the Jerusalem Town Hall and the Jaffa Gate of the Old City; Manger Square at the heart of Palestinian Bethlehem; The Rabin Square in Tel Aviv, and the town of Sderot on the Gaza Strip border.

"Wearing modest black clothes to express mourning, we light candles and lay down olive branches, flowers, basil and henna powder (a Muslim custom in commemorating slain children). Across the country we create symbolic memorial sites in memory of the people on both sides, who perished as victims of the prolonged and destructive conflict. We hold a Moment of Silence. Those who want to utter a prayer, while others just listen to the whisper of the wind. We express shock and pain at the war and hope to create a common future of peace. We read out the names of the children who were killed and their lives shattered (hundreds of Palestinian children and a single Israeli child). It is not enough to state the numbers - we must read out the names behind these numbers. We speak out, loud and clear: No more war! We are all human, we all suffer!” 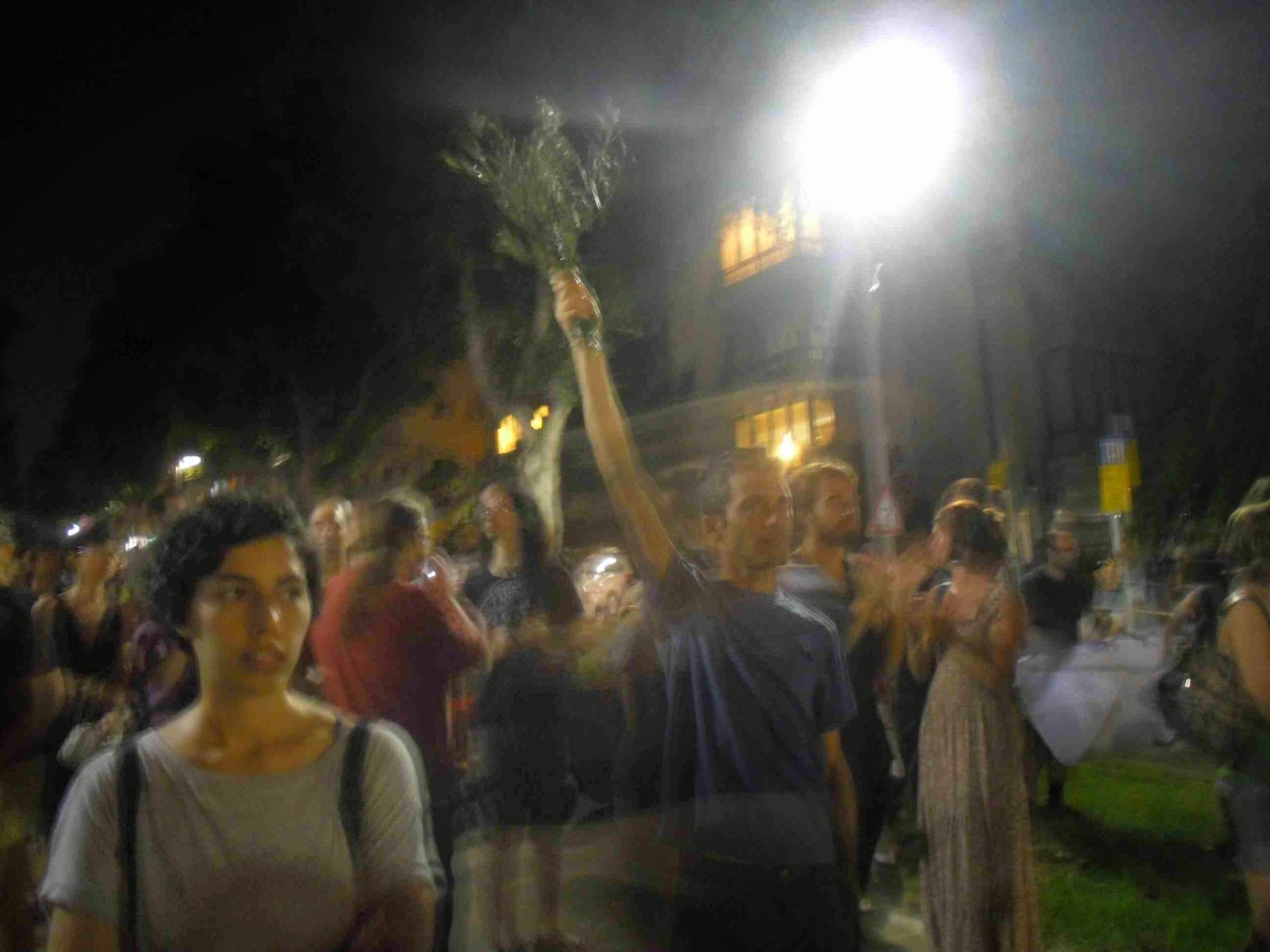