This week: Ruling the air and women’s empowerment

In February this year, an Iranian drone flew into Israel's airspace and was shot down after a few minutes. A week later, Prime Minister Netanyahu – in one of his trademark gimmicks - presented a fragment of the Iranian drone to the Munich Security Conference,  stating: "Iran committed an act of aggression last week, launching a drone into our airspace!" Then Netanyahu turned directly to the Iranian Foreign Minister and waved the drone fragment: " Do you know this, Mr. Zarif? It's yours.”

The State of Israel does not exactly respect the airspace of others. Already for decades, the Israel Air Force has taken the liberty of regularly flying in the skies of Lebanon. With the outbreak of the civil war in Syria, this liberty was extended to the Syrian skies as well. There, Israeli planes began to carry out attacks and bombings "preventing the creation of an Iranian presence.”  At first, Israel denied any involvement. But later the pretence was dropped. Recently the Israeli Air Force announced – openly and rather proudly - that it had carried out no less than 200 attacks in Syria.


The Israeli presence in Syria's skies was made possible through coordination with Russia. Netanyahu agreed with Putin that Israel would not interfere with Russia's efforts to restore Assad's rule and would not intervene in any way in the mass killing carried out against Syria's "rebellious" citizens. In exchange, Russia would not intervene in Israeli bombing of Iranian targets throughout Syria. This partnership culminated a few months ago with Netanyahu being invited as the guest of honor at the military parade in Moscow's Red Square, and… on the night of his return to Israel he sent the air force to a particularly intensive attack on Iranian targets in Syria.

But the bromance was short lived. This week, Assad's army, having only an obsolete  and ineffective air defense system, tried in vain to block an Israeli attack on the post of Latakia - but accidentally hit a Russian plane and shot it down, with all its 15 crew members killed. Suddenly, Netanyahu discovered, instead of the friendly and affable President Putin, an angry Russian bear. Unwilling to listen to Israeli explanations and apologies, the Russians placed the full blame on Israel and announced that they would provide the Syrian army with an updated air defense system. In vain did Netanyahu cry out to Putin that "placing the S-300 ground to air missiles in irresponsible hands would exacerbate the situation." Commentators tend to say that the downing of the Russian plane was but an excuse for an already planned Russian volte face in Syria. The restoration of Syria as a sovereign state, under Russian patronage, is nearing completion.  And a sovereign state is supposed to be able to protect its airspace ...


Netanyahu does not give up easily. He declared that Israel would keep at all costs the freedom of flying in the skies of Syria, and in his speech at the UN General Assembly added  casually that this Israeli freedom is soon going to be extended to the skies of Iraq as well.
Our Prime Minister might not be aware of the definition of anti-Semitism widely accepted in Europe – and which he himself recently pressured the British Labor Party to adopt.  It includes in its definition “those who practice double standards” regarding the policies of the State of Israel and who set for Israel different rules of conduct  than those prevailing in other countries. Anyone who acts in such a manner is liable to be denounced as an anti-Semite - so maybe our PM should be a bit more careful.


Israeli intelligence did an excellent professional job and located in the Iranian capital Tehran a secret warehouse housing radioactive materials. Prime Minister Netanyahu revealed the exact address on the podium of the UN General Assembly platform and invited the International Atomic Energy Agency to carry out forthwith an inspection there. A good idea, without a doubt.

No complicated intelligence operation is needed in order to know where the Dimona nuclear reactor is located. It's no secret, the reactor’s location has been well known for decades. But in all these years, no IAEA inspector has ever set foot there. Not even after a former employee of this reactor, named Mordechai Vanunu, published detailed testimony indicating that nuclear bombs are produced there by the hundred - even then, the Atomic Energy Agency  was not invited to make an inspection. But maybe, even if it's a few decades late, the time has come at last? After all, no double standards, Mr. Netanyahu!

The Israeli Navy declared with joy and pride that, for the first time, a woman selected to command a gunboat patrolling off the coast of the Gaza Strip. And Israeli newspapers featured a picture of the new captain, Lieutenant Dana Abudi, smiling at the wheel of her ship. "I am grateful for the confidence that was placed in me, to lead a fighting crew and a fine vessel in one of the most operationally challenging theaters of The Sea Arm." As reported, Squadron 916, one of whose Deborah gunboats will from now on be commanded by Lieutenant Abudi, "is in constant  daily friction with the Gazan population, particularly the sector economically dependent on the fishing industry."
“Friction” is something of an understatement to describe the daily relations between the fishermen of Gaza and the navy of the State of Israel. In fact, very little is published about the subject in the Israeli media. In order to learn a bit more, one needs to turn to the Palestinian news outlets and to international human rights organizations. For example, the testimony of Rajab Khaled Abu Riela, 30 years old, who at midnight on June 8, 2016 let the port of Gaza together with his brother and two cousins. “We were out at sea, fishing, until 1:30 am. When we started our way back to the port, an Israeli warship approached. The soldiers started insulting us through the megaphone, and soon opened up with live ammunition at our two small boats. Then the warship directly rammed us. I tried to escape, but was shot in the leg. They took me and my brother to Ashdod port, where they wouldn’t give me any medicine or treatment for the injury I sustained. I was left bleeding until 9:30. Finally they  sent  me back to Gaza. An ambulance took me directly from Erez Checkpoint to the Shifa Hospital and there immediately into surgery. The doctors managed to remove the bigger pieces of the bullet – but many small fragments still remain in my leg, and probably I will have to live with them for the rest of my life”.


The next time that Gazan fishermen come under a barrage of live fire from an Israeli warship, they will be honored to be attacked by a ship with a female captain…


A proud captain at the wheel - Yediot archive 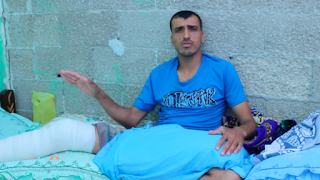 
A wounded fisherman tells his story - ISM
Posted by Adam Keller אדם קלר at 7:20 AM

My Fifty Years With Uri Avnery