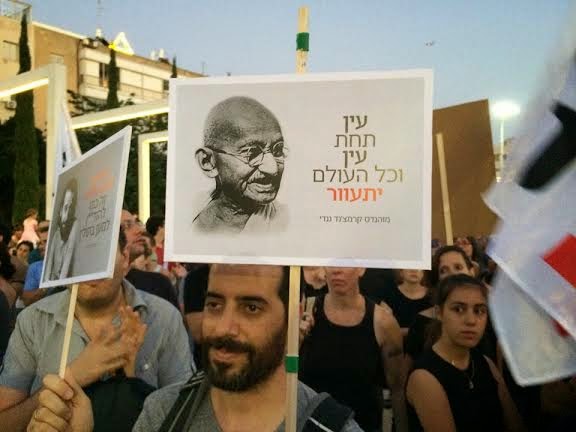 "An eye for an eye only ends up making the whole world blind."

It is becoming clear that the government, army and security services assumed from the start that the three boys were no longer alive.  Probably, it was no surprise for them that there did not come any claim of responsibility, and no proposal of negotiating their release. The soldiers who conducted the searches on the ground were instructed to turn every stone, quite literally, and also to empty water holes and search their bottoms. The soldiers were sent to look for dead bodies, not for hostages. But on the media were imposed gag orders, preventing them from publishing information pointing to the death of the boys. The Israeli public was called to take part in mass prayers and rallies on city squares with the call "Bring back our boys" and one gets the impression that also the three families going from hope to despair were not informed to the full.

To whom was it worthwhile and why? It is not difficult to guess. Long before Gil-Ad Shaer, Eyal Yifrah and Naftali Fraenkel took their fateful ride, Binyamin Netanyahu already marked as a primary target the Palestinian Reconciliation Agreement. He was determined to drive a wedge and break up at any price the "Technocrat Government" created jointly by Fatah and Hamas. From the first day the government of Israel declared Hamas to be responsible for the kidnapping - a clear proof, if it exists, has not been published until this moment.

Under cover of the great outcry "Bring Back Our Sons" the army started a widespread detention campaign, which had no direct connection with the kidnapping. Operation Brother's Keeper was mainly directed against "the civilian infrastructure" of Hamas - starting with the Speaker of the Palestinian Legislature down to grassroots activists of Hamas-linked educational institutions and charity associations. It was clear that the people detained knew nothing about the kidnapping, and nobody expected them to know. But, as was noted with satisfaction by knowledgeable commentators such as Alex Fishman of Yediot Achronot, the kidnapping created "a rare window of opportunity" in which the world kept silent about a massive detention campaign which under different circumstances would have caused a wave of international protest. Nor was there much ado about the killing of several Palestinians, among them boys of the same age as the Israelis which the army supposedly was searching for.
And Netanyahu made the propaganda most out of the "moral high ground" of searching for innocent kids, kidnapped on the way home from school.  It was pushed to the background that the school happened to be in a settlement and that the three students were hitchhiking in the heart of an occupied territory.
It came eve to sending the three mothers to The United Nations Human Rights Council in Geneva, followed by a chorus of  protest in the Israeli media against the "hypocrisy and cynicism" of the Council members  closing their ears to the mothers' heartfelt outcry. Indeed, the UN Human Rights Council is an easy and convenient target of criticism. It is not staffed by Human Rights activists but by official representatives of governments - some of which are themselves responsible for severe violations of human rights and all of which have many political and economic interests and hidden agendas. Hypocrisy and cynicism there are in plenty, but what could compare with the cynicism of giving mothers false hope.

When the three bodies were discovered after 18 days, the gates of hate were opened wide. It was not the mothers, or the families that opened them. Exactly they did not demand anything but that those who killed their sons would be caught and punished. But there were enough others who were blowing on the flames of hatred, starting with the Prime Minister himself who used a famous poetry quote "Satan himself has not created a fitting revenge for the blood of a small child." Like most of those who quote this, Netanyahu forgot the other words of Bialik's poem: "Cursed be the one who cries 'take revenge' ."

In the cabinet resolution it was stated "they were murdered by human beasts", and this was quoted in banner headlines. From the official speech at the mass funeral on the following day the media quoted the words: "we sanctify life, while our neighbors sanctify death." In the night in between, between human beasts and life sanctifiers, another Palestinian youth was killed by army fire at the Jenin Refugee Camp, but his death was only marginally reported.

"A whole nation and thousands of years of history demand revenge" proclaimed Rabbi Noam Pearl, general secretary of the National Religious Bney Akiva Youth Movement. He demanded the formation of "a corpse of avengers, which will not stop at the mark of 300 Phillistine foreskins," referring to one of the most barbaric acts which the Bible attributes to King David. The words of Rabbi Pearl aroused many protests,  also inside the traditionally right-leaning Bney Akiva movement itself, and several of its branches broke away, altogether. Still, the inflammatory calls for revenge spread with a speed which would not have been possible before the creation of electronic social networks. In the "revenge page" created on Facebook there were numerous selfie photos: soldiers pointing the gun at the viewer with the words "let the army smash", and girls carrying the sign "to hate Arabs is not racism but a moral principle".

From Facebook it was but a short distance to the streets of Jerusalem where hundreds were rampaging and shouting "Death to the Arabs!" and "Revenge! Revenge!" and were running all across the city, searching for Arabs to beat up. The police announced that it had mobilized large forces on Jaffa Street and the Machaneh Yehuda Market taking, credit for succeeding in preventing Arab passers-by being killed. But at 4am on the same night two unknown persons came to the Shuafat Neighborhood in East Jerusalem and found there a 16 year old boy named Mohammed Abu Khdeir, who was studying to become an electrician and who was on his way to the neighborhood mosque because of Ramadan. These unknowns dragged the boy into a car and  later on that morning his burnt body was found in a West Jerusalem park.

The authorities of the State of Israel, which were so clear and decisive about the responsibility of Hamas in the case of the previous kidnapping and murder showed themselves very hesitant in this case. Was it the act of people who were influenced by those very strong calls for revenge, looking for a Palestinian 16 year old boy? That certainly sounds plausible. But from the police came an alternative - i.e. that Mohammed Abu Khdeir was maybe a homosexual murdered by Palestinians and that just by coincidence this happened exactly on the night of the mob attacks on the streets of Jerusalem.

Israeli politicians and columnists who refer to this murder are taking very good care to note that the circumstances of the murder and the identity of the perpetrators are still unknown and that one should patiently wait for the results of the police investigation. But it would be difficult to expect the inhabitants of Shuafat to also show such patience. In the last days the Palestinian neighborhoods of East Jerusalem burst out in demonstrations and riots whose like was not seen there even in the days of the first and second Intifada, and during the boy's funeral 35 people were wounded from police fire.  A voice of compassion came from the bereaved  Fraenkel family: “There is no difference between blood and blood, There is no justification, no forgiveness and no atonement for any murder.”

Yesterday evening those who still try to keep their sanity in the madness around gathered for a rally on Habima Square in Tel-Aviv. Thousands of people turned up, and carried the signs "There is no consolation in revenge!" and "No to revenge! Yes to a political solution!" and "Political solution - a deathblow to terrorism!" and "An eye for an eye will make the whole world blind" with a picture of Mahatma Gandhi. They chanted: "We will not let extremists run our lives!" / "Jews and Arabs refuse to be enemies!" / "Government lies will not bring security!" / "All government ministers are part of the incitement!" / "Government of settlers and tycoons has no solution!" and "This is not an extremist minority, it is a racist government!" Yariv Oppenheimer of Peace Now called for silence in order to let speeches of Knesset Members be heard, of Meretz and the Labour Party and the Hadash Communists, and also Amra Mitzna of Tzipi Livni's party, on whom hacklers called to withdraw from the government coaltion.

We went home with the feeling that not everything is lost, but also with anxiety about the increasing escalation on the Gaza Strip border.