The Arab Knesset Member you love to hate

On the front page of "Israel Today", commonly known as "The Bibinews", there appeared yesterday a big red headline: "The Disgraceful MK Zoabi." On the second page there was a black headline proclaiming: "Zoabi’s place is in prison." And below the title there was very extensive a collection of quotations from Knesset Members and ministers and army officers and many more: "There is no limit to her cruelty and cynicism" / "She does not deserve to be an MK" / "Not only the kidnappers are terrorists, Zoabi is a terrorist too" / "Her harsh words are wild incitement and encouragement to terrorism" / "She is not worthy to be in the Knesset, put her on trial"/ "Remove her immunity and expel her to Gaza". And so and on, a page and a half in small crowded characters.

Tucked in a corner among all the outpouring of abuse were the words which MK Haneen Zoabi  said in a morning radio program, and which raised such a fuss: "I'm not surprised at the abduction. People are living under occupation, that is not  normal living. They are forced to use such measures until Israel would  understand the suffering of people living under occupation”.

This had happened before, and more than once or twice. Ever since the State of Israel was established, it has been happening at regular intervals. Repeatedly the surprising discovery is made that the State of Israel has Arab citizens, that those citizens have the right to vote in Knesset  elections, and they do elect parliamentarians to represent them in the Knesset.  And what a surprise, the Arab Knesset Members who represent the Arab citizens are not  Zionists, no do their cars bear the bumper sticker "Long Live the IDF”.

Every few years, usually at a moment of one national crisis or another, still another storm of controversy bursts out when a statement by an Arab Knesset Member evokes an emotional outburst, and loud demands are made to expel the offending Member from the Knesset, or from the country, or altogether from the land of the living. Each generation in the history of Israel there was the one specific Arab MK which you loved to hate. Haneen Zoabi is the first woman to be placed into this slot, and the outburst of hatred against her includes a significant element of male chauvinism.

The first such case was in 1949, the first year of Israel's existence and of the Knesset parliamentary activity. The Arab Communist Knesset Member Tawfik Toubi  dared to voice in the Knesset a criticism of the destruction caused by Israeli soldiers during house searches at Arab villages in the Galilee. He was met by an outburst of angry shouts, some calling out: "You should say thank you that you are allowed to sit in the Knesset give”. His demand for an investigation was rejected by an overwhelming Knesset majority.

Following this incident, the poet Nathan Alterman published on Novemeber 18,1949  a poem entitled "The Rebuke to Tawfik Toubi ", included in his regular  column in the Davar newspaper.  The poet and thinker Alterman was an influential public figure life during the British Mandate and the early years of Israel. He was not a left-winger as the term is nowadays understood in Israel. In fact, in his last years of his life he was a founding member of the Greater Israel movement. But he was a decent person.


"The Rebuke to Tawfik Toubi "

So, who is Tawfik Toubi ?
He is a Knesset Member
He is an Arab Communist.
By right and not as a favor
Does he sit in Parliament

Like all other members,
He too sits there
By virtue of the law
It is time
We remember that, fellows

No! There is no call
For Parliament
To wave at him
Time and again
The threat of divorce

By no means should Parliament
Say: You may speak
Because of my generosity…
Out of my goodness…
Because I give you leave…
This should never be said
Even in private

The time has come to decide:
Like all other delegates
Toubi is here by right!
And if we mean it seriously
There is no need
To present to him
Every two days
The bill of what he owes

Such is the nature
Of Democracy:
Her servants
Owe gratitude to no person

And to the main issue:
The army is conducting searches
Not a week passes
Without a new sweep

One thing is clear:
When a member gets up
With a bit different view
Of these searches
It is no less important
Then the glowing communiqués
Published in our press


In his mouth were facts
Not yet disproven
An investigation he demanded
So what is the way out?
No!... A very unhealthy forest
Was the forest of hands
Springing to block investigation
And rule all he said
A mere defamation…

Without debate was it struck
Right off the agenda
Could that possibly mean
There had been no substance?
We conduct intensive searches
Yet find no time
For soul-searching


So, it was an Arab Communist
Who took it up.
That is not a reason
To tear it all down
In derision
No! Especially when
There is reason to suppose
This time he had done
A bit of the government’s
Own job of investigation.

Also this week, 65 years after that session where the call for investigation was rejected out of hand, soldiers of the IDF left a great mess in Palestinian homes which were searched. The Israeli public through its media got only sanitized footage courtesy of the IDF Spokesman’s bureau, and no one even raised the issue on the Knesset floor.

Nirit Haviv, Israeli peace and human rights activist, this week visited several villages in the north-west of the West Bank, and her report included: "(...) Three nights ago, a midnight raid was held in the village of Jinsafut and a resident arrested. The father of detainee said that his son, 34, married with three small children, is making a living from a family business of porcelains and marble ware. The soldiers herded the entire family into one room, beat up the detainee in front of his small children, searched the house, poured the contents of the cupboards on the floor, broke marble tiles, poured grain sacks, and caused extensive damage. The detainee’s father worked for many years in Israel, and currently works in the settlement of Tzofim. Since the detention of his son he did not go to work and is very worried about him. An officer called the family to tell that is at Hawara. It is not yet clear id this good news or bad. The blockading of villages, arbitrary arrests, violence, damage to property – all that does not bring back the abducted boys, but certainly it increases the hostility, frustration and despair of the population. The use of such practices as has lasted for half a century, unfortunately we have learned nothing from experience". 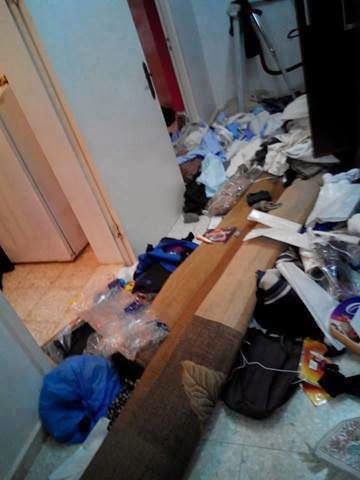 A Palestinian house visited by soldiers this week
Posted by Adam Keller אדם קלר at 1:09 PM