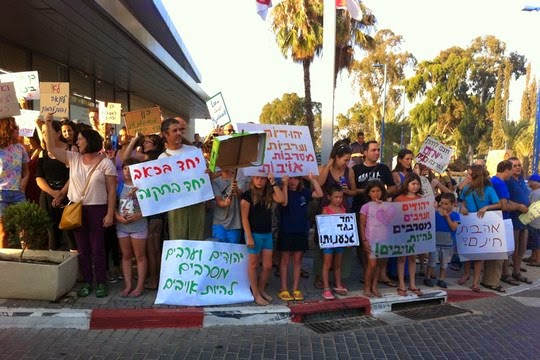 "Together against racism", "Together in pain, together in hope",
"Jews and Arabs refuse to be enemies" (photo: Avigail Shaham)

Pardes Hanna. A nice sleepy town with a bit over 30,000 inhabitants, halfway between Tel Aviv and Haifa. Saturday night, several activists who live in Pardes Hanna went off to participate in a demonstration against racism in Haifa, but on that evening racism burst into their own hometown.

"I sat with the family in the McDonalds at the Big shopping mall and suddenly they arrived. Fifty or sixty people, aged 15 to 30, waving Israeli national flags and singing the anthem and shouting 'Death to the Arabs! Death to the Arabs!'. They run shouting and flag-waving in front of the shops which have Arab employees and Arab shoppers, at every shop entrance shouting 'Death to the Arabs! A Jew has a soul, an Arab is a bastard! Hanin Zoabi is a whore! '. They stopped every car which had Arabs in it, knocked on its windows and made killing gestures to those inside. A police patrol car went after them. We asked the police why they did not stop them, the police told us they did not have the manpower for it."

Yasmine Halevi, who was that night at the demonstration in Haifa, told: "On Sunday morning at nine o'clock I got an sms message: How about organizing  a protest about the mini-pogrom yesterday at the Big? Honestly, I felt weak in the knees. Just at the start of a new week, amid tons of work and deadlines to meet and a dirty kitchen and laundry, and while transporting children to summer camp and passing just at the signs of that same Big mall. Protest, exactly now? Why, who has the time and energy, and anyway I was quite frightened.  But I could not let go, I realized if I did not do it nobody will.

After two phone calls to people whose opinion I value, I did it in the simple way which is possible nowadays: set up an Event on Facebook. Let come who will, I told myself, just let them be no less than a hundred, because I was really frightened. Without a megaphone, no handbills, the most a-political text I could manage. But soon I was surprised. The event started picking up momentum, I got positive comments, supporting and even joyful.

Six thirty pm. We stayed at the entrance, more and more came and joined us. I expected 150 people but we were several hundreds. Opposite us there began to pile up the mass of the local hooligans, exclusively male with their flags and anthem and shouting and hand gestures, confined by the police. On our side there were some familiar faces and less familiar. Some of them had hardly ever been in a demonstration, perhaps some only in the Social Protest of summer of 2011. Individuals who tend to stay away from groups, political camps and shibboleths. But more and more of them came, with their signs and children. They understood what we are facing. This community, where I am living several years, moved me deeply today. Even if people here are not always politically coherent, they know what we are facing. They know when is the time to come out and stand our ground and say: You are not going to conduct any manhunts here!"

Pardes Hanna is a microcosm of the state and society and country which is fast spinning out of control. Just a bit more than two months have passed since the final collapse of the mediation efforts led by Secretary State John Kerry. There were commentators who wrote at that time that the situation cannot remain static, that if we don’t move forward to peace we would fall down into an abyss of violence and bloodshed, that the atmosphere was very volatile. Probably even those commentators themselves were surprised at how much and how quickly their prophecies came true.

A day before yesterday, on Sunday this week, the Israel Police Headquarters announced  the apprehension of six young Jewish Israelis, charged with  having kidnapped the Palestinian boy Mohammed Abu Khdeir and burning him to death. But in order to “counter-balance” the police simultaneously also announced the arrest of an Arab taxi driver, charged with having stabbed to death a young Jewish woman, two months ago, Shelly Dadon, who boarded his taxi. Maybe someone thought that balancing the horrors against each other will help lower the flames and emotional turmoil of riots and counter-riots and revenge for revenge for revenge. It did not exactly work out this way.

And today, a stronger anodyne is used: all-out war in Gaza.  The Israeli Defense Forces announced the launching of “Operation Protective Edge”, the  youngest sibling of “Cast Lead” in 2009 and “Pillar of Defence” in 2012 and various other operations in and around Gaza. PM Netanyahu announced sternly that “The gloves are off”. With Israeli combat planes flying non-stop bombing missions over Gaza, and Palestinian rockets launched into Israel, and tens of thousands of ground troops mobilized and poised to invade. Perhaps the tensions and passions of Jewish and Arab civilians would be swept under the carpet – there to fester untended until the next outbreak.

Just as I wrote the above, the air-raid sirens sounded over the metropolitan Tel Aviv area. One rocker, successfully intercepted by the Israeli Iron Dome system made us run for safety to the staircase. There will probably be more in the coming days.

To be fair, Netanyahu had been far from trigger-happy, as far as Gaza was concerned. Under another PM (for example the “dovish” Olmert) this operation might have been underway a week ago already.  In the past days, Netanyahu had undertaken a conspicuous policy of “restraint”, which caused him to be accused of “weakness” and led to an open rift between him and his longtime partner, the hardliner Foreign Minister Avigdor Lieberman.

Netanyahu had been willing to reach a ceasefire with Hamas, under Egyptian mediation, and for some days it looked like something might be worked out. But he was completely unwilling to relax in any way the siege of Gaza, which had been increasingly suffocating what is left of its economy. Gaza’s Rafah Border Crossing to Egypt was supposed to open after the Palestinian Unity Government came into being (in fact, that was the main reason why Hamas made that deal in the first place) but Egypt’s General Sisi  - implacably hostile to Hamas and on excellent terms with Netanyahu – reneged on his part and kept Rafah closed. And so Hamas did not agree on a ceasefire, holding out for an end to the siege – and Netanyahu responded by reducing the area, where Gazan fishermen may venture, from six miles to three tightening the rope around Gaza’s neck another notch. And the cross-border exchanges escalated day by day and night by night, and here we are in a war which nobody really wanted. It can be said that both the Government of Israel and the Hamas leadership played brinkmanship, and we all fell in.

At the worst possible timing, Ha’aretz newspaper on this very day launched its long-prepared “Ha’aretz Israel Conference on Peace”, inviting various VIP’s to come and speak about the possibilities and prospects of achieving peace in this troubled country and region. Unsurprisingly, many of the speeches reported from there were far from offering real hope.

In fact, when the Ha’aretz editors initiated this event half a year ago, they had expected Kerry to keep his timetable and achieve an Israeli-Palestinian agreement by the April 29 deadline. In that case, the conference in July would have provided the newborn agreement with public backing from inside the Israeli society. As things are, Ha’aretz still placed prominently at the top of its front page a specially-commissioned article from the President of the United States, Barack Obama.

Obama repeated all the nice words and catch-phrases which he made at his speech in Jerusalem, a year and a half ago – again reiterating an American commitment to peace between Israelis and Palestinians and to the two-state solution. Some activists which I know did not bother to read it through. The operative sentences were tucked in towards the end: “We remain determined to work with both Prime Minister Netanyahu and President  Abbas. When the political will exists to recommit to serious negotiations, the United States will be there, ready to do our part”.

Thousands of years ago, a prophet living in this country sounded a stern warning to those putting their trust in a super-power of that time:” Now, behold, thou dost trust upon this broken reed, even upon Egypt, on which if a man leans, it will go into his hand and pierce it; so is Pharaoh, king of Egypt unto all that trust in him.”

With little to expect of the world’s powers, the Tel-Aviv based Coalition of Women for Peace took an initiative for action within hours of the Army announcing its Gaza operation.


Stop the Killing, End the Occupation!

We will not remain quiet as the bombs are falling!

In the past month, Israel raided several thousand homes, and arrested over 600 Palestinians, including women and children.

Also in the last few weeks, everyday forms of racism and violence, by the state and its officials, have escalated exponentially.

Once again, Israel launched yet another irresponsible and unnecessary military 'operation,' at the expense of the residents of the south, who, together with Gazans, deserve to live in dignity, without constant and daily threats.