Worms in the shower

On the same day that the Pope made an impassioned call for an end to the occupation and for peace between the existing State of Israel and the to-be-created State of Palestine, Uriel Ferera returned to Military Prison Six, after a few days of freedom spent with his family in Be'er Sheva. From the experience of many previous refusers, it will likely take a lot of time and struggle, many terms of incarceration followed by a few days off and a new detention period, before the military authorities become convinced that Uriel Ferrara is really and truly unwilling to be a soldier in an army of occupation. (Omar Saad had already undergone this procedure seven times, and the army is not yet ready to let go...) 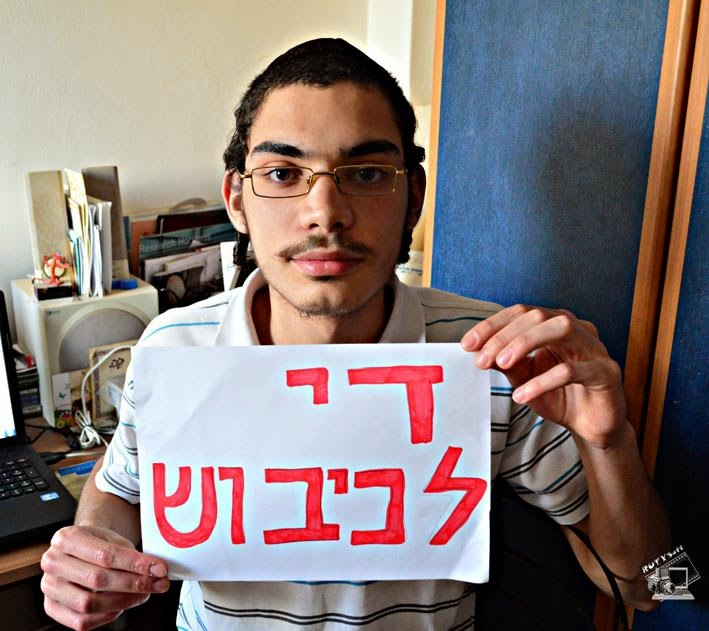 In his room (sign reads: "Down with the Occupation")

Here's what Uriel Ferrara wrote and distributed through Facebook:

My name is Uriel Ferera, on April 27, 2014 I was sent to 20 days’ detention in Military Jail 6, because I refused to serve in and be part of an occupying army, an army whose acts are anti-democratic, violating human and civil rights. I was released on Friday, May 16. When I got home I felt a huge change, the difference between being imprisoned and being free. At last I could express    all the sadness that I had been bottling up in confinement. Sadness for being locked up - not locked up because I'm a murderer, rapist or any kind of  criminal, but rather locked up because I opposed all the anti-democratic acts of the army in the Territories and did not want to be a part of this activity.

They tried to break me, putting me for a day and a half in the Isloation Ward. Then I was moved to a ward which houses prisoners incarcerated for criminal acts or for long-lasting desertion from service. All I had asked for was to an alternative civil service instead of military service, even for three years, but the army did not care. They imprisoned me for my views, because I oppose all the injustice they are doing to the Palestinians.

When I was placed in a cell with other prisoners I got on with them quite well. I found that most of them had deserted because of economic problems. I spent the time reading and studying the Torah   (Jewish Scriptures), and together with two fellow prisoners I solved Suduku and crossword puzzles. Most inmates have had no matriculation and do not read books, so their boredom is unbearable. I got to teach mathematics to one prisoner, and many have asked me questions about Judaism and Torah and wanted to strengthen their religious knowledge.

I was in cell No. 4, there were ten prisoners, double-decker metal bunk beds with springs, the cell has a surveillance camera. The floor in Cell 4 is broken and therefore, when it is washed with water, lots of water remain below the floor and it causes decay, and we have to smell all this rot . There were also worms in the shower.

Most inmates smoke a lot, so the prison officials know that this is their weak spot. If someone displeases them, they forbid him to go to the canteen and buy cigarettes. They knew that I don’t smoke and therefore they denied me phone calls, at first for eight days and then extended by three more days . In short,  they hit each of us where it hurt most.

When phone call was allowed at all it was limited to four minutes. I did get time to pray,  three prayers every day. In the last week they did not give me the letters which my mother and a lot of other people sent via fax. They asserted that the letters contained forbidden Information which must not be allowed into the cells. They also denied me the right to talk to my lawyer, which is very serious .

Soon I need to report to the Induction Center from where I will go off to my second incarceration. I thank you all for the support, for all the letters you sent me, even if the prison did not pass them on to me.

Release Omar Sa’ad and all conscientious objectors and all political prisoners!
End the occupation, Free Palestine! 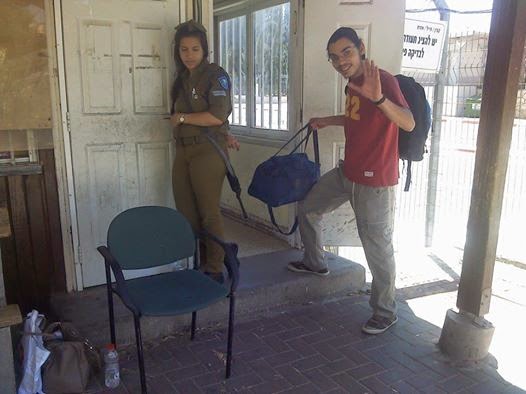 
It is not sure that letters of support and messages will actually get to Uriel Ferera. Nevertheless, it is worthwhile to send them, if only to make clear to the military authorities that he is not alone.


Israel
Posted by Adam Keller אדם קלר at 7:36 AM