In Tel Aviv’s Ben Yehuda Street a huge Israeli National Flag was hung, covering an entire building. On the flag were inscribed the words "Kol Hakavod Le’Tzahal" (Three Cheers to the IDF).  Somebody must have paid a lot of money for this patriotic presentation. But on the windows and balconies of the neighboring houses, there were only few of the simple flags which ordinary citizens are supposed to hang out on this day of the year. The number of flags to be seen in the city streets on this Independence Day was manifestly less than it was last year and two years ago. Also the boys selling flags for cars at crossroads were sorely disappointed with the steep decline in sales.

No, no one had organized a boycott. There does not exist any organization which could have called for a boycott of the National Flag of the State of Israel and gotten hundreds of thousands of Israeli citizens across the country to participate. The fact remains: in the days before Independence Day, anyone who bought a newspaper got along with it a fine gift, a Blue and White Israeli National Flag made at the sewing workshops in faraway China.

A flag was available to all, free of charge, and yet this year hundreds of thousands – each separately, in their own homes and without anybody organizing it - chose to leave the flag packed in the shiny nylon bag with the logo of Bank Hapoalim which had provided them this gift . Probably without giving it any coherent political reasoning, they simply did not spend the five minutes needed to open the package and hang the flag in their windows with the help of the ropes also  generously provided courtesy of Bank Hapoalim. Exactly what caused this lassitude and fatigue which befell so many Israeli citizens on the sixty-sixth Independence Day of their country? It is certainly worthwhile to look into this question.

This year, a new Independence Day ceremony was added to the great number of annual traditions already inaugurated earlier: the Zionism Contest  was held at the Jerusalem Theater , moderated by comedian Eli Yatzpan , best known for his skill in producing hidden camera programs. But in this case he was involved in a completely serious and straightforward program, initiated by the World Zionist Organization in order to boost and strengthen Zionist awareness among the citizens of Israel. The contest is designed for entire families to take part in. It is perhaps not really surprising that it was won by Nili and Aryeh Rokach of the settlement of Kdumim on the West Bank, along with their seven children and twenty-two grandchildren. It was they, more than all other contestants, who demonstrated an in-depth knowledge of Zionist ideology and practice. They were officially named "Israel's First Zionist Family 2014 " and will also get a fully paid cross-continent family trip tracing the life of Zionism’s Founder Binyamin Ze’ev (Theodor)  Herzl. (The news item on the pages of "Yedioth Ahronoth" neglected to mention if financing of the family trip indeed includes all twenty-two grandchildren…)

The settlement of Kdumim, where Israel's First Zionist Family 2014  lives, had been established on the lands of the Palestinian village of Kafr Qaddum. The main road used to lead to the village became reserved for the exclusive use of the settlers, with Palestinian residents required to travel on a winding and bumpy side road. Every week they demonstrate and protest – also on the week of Israeli Independence Day. Qaddum activist Murad Tawi  (

On other occasions, demonstrations ended with arrests and detentions, or soldiers arriving in the late night to detain at home the activists who had eluded them during the day.
http://en.wikipedia.org/wiki/Kafr_Qaddum

All in all, The occupier state’s sixty-sixth Independence Day was a fairly normal day in the occupied Qaddum Village, near which the occupiers erected the settlement of Kdumim. There is no doubt that the villagers continue to protest, next week and two weeks from now and three. Members of Israel's First Zionist Family 2014 will be leaving behind soldiers who  guard the settlement and themselves will embark on the fully paid family trip tracing the life of Zionism’s Founder.

Like every year, Independence Day events started with the torch-lighting ceremony on Mount Herzl, where twelve model citizens are honored for their deeds in the past year. The keynote speech was delivered by Knesset Speaker Yuli Edelstein, who praised the brilliant achievements of the State of Israel in its sixty-six years of existence, but warned of the deep rifts which run through Israel society. His speech was broadcast live on all networks, and afterwards  Edelstein returned to his home in the settlement of Alon Shvut on the West Bank, travelling on "The Tunnel Highway" - another of the many roads reserved for exclusive Israeli use and from which Palestinians are strictly banned.

This year the Netanyahu government decided that all twelve torches would be lit by women. This decision was initiated by Culture Minister Limor Livnat, known for her warm support of Feminism, and her equal enthusiasm for the  Settlement Project. (It might be recalled that it was she who issued a stern warning to the managements of all theaters in Israel, making clear that any theater daring not to perform in the Halls of Culture of West Bank settlements would promptly get its budget cut off.)

At least some of the women chosen to light torches at the official ceremony on Mount Herzl were definitely worthy of the honor awarded to them. Still, there were quite a few women as well as men who preferred the Alternative Torch Lighting ceremony held simultaneously by the Yesh Gvul movement. Opposite the Prime Minister's Office in Jerusalem - at the spot where a Peace Now activist was killed in 1983 from a grenade thrown by a right-winger - twelve men and women, Jews and Arabs, got up to light torches. They were honored for having acted in the past year to promote "an Israel which is just, equitable and worthy. Torches for an immediate end to senseless violence and to the occupation of the Palestinian territories, redressing the injustices we cause and correcting the attitudes towards the weak among us, marking the anniversary of Israeli Independence alongside that of the Palestinian Nakba and expressing hope for peace with all our neighbors."

First and foremost, it was a ceremony designed to pay homage to those who refuse to serve the occupation and the army of occupation. Those who had been in prison, during the decades of  occupation; the two objectors at present behind bars, Uriel Ferera and Omar Sa’ad (who, after 150 days in detention, was hospitalized due to the military prison authorities failing to provide him proper medical care). Also, homage to the future Conscientious Objectors, such as Adi Barco of the High School  Letter signatories – youngest of the torch lighters – whose own turn to refuse and go to jail is likely in about two years. 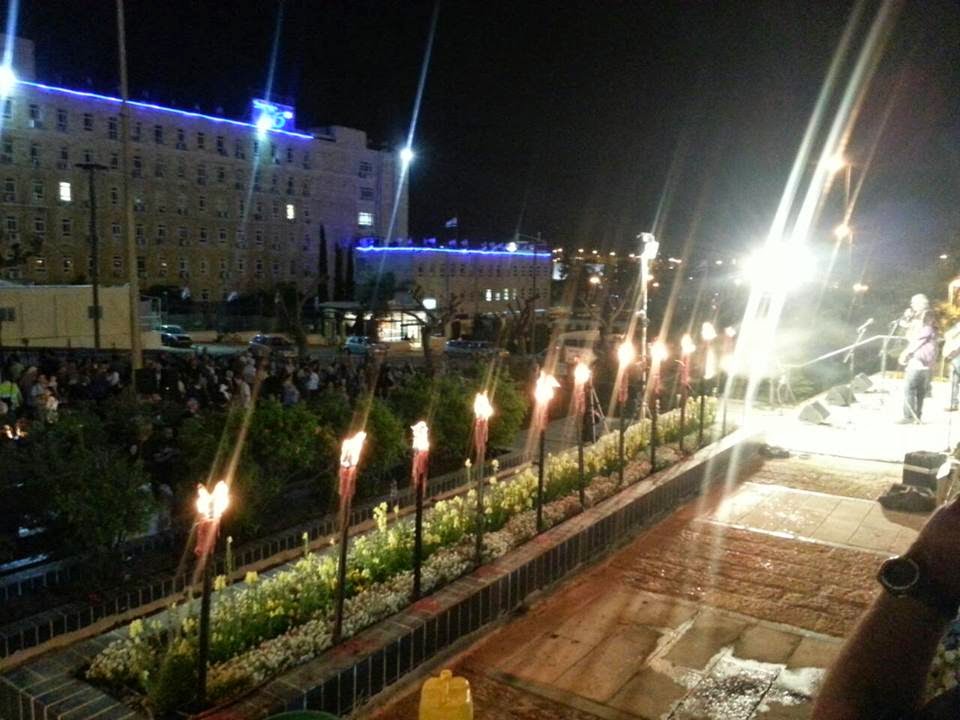 Lighting the torch of refusal

At the end of the torch-lighting ceremony, participants were invited to take part also in picketing the Defense Ministry in Tel Aviv, demanding the release of the imprisoned objectors and singing an updated version of a protest song dating to the First Lebanon War: "No thank you, Mr. Ya’alon / Go yourself to Hebron / Occupation's plans will fail / When we all go to jail".

And there was the Alternative Memorial Day ceremony, held by "Combatants for Peace". Contrary to the official Memorial Day, commemorating none but fallen Israelis, at the alternative event bereaved families - Israeli and Palestinian alike – sat on podium side by side, each in turn rising to tell a painful personal story and share their grief with each other. Evidently, this format of commemoration does strike a deep chord among the public, with participation in the alternative event increasing from year to year. This year the hall prepared at Tel Aviv Exhibition Grounds, with three thousand seating places, was too small to hold all who want to participate.

About two hours after the conclusion of the alternative torch-lighting ceremony I arrived back to the city of Holon. By then, the street festivities had nearly run out - attempting in vain to reconstruct the spontaneous enthusiasm and dancing in the streets which broke out on the night after the UN vote on the Partition Plan in November 1947, when the Jews who lived in the country felt  the ecstasy of salvation.

At 11 on the night of May 5, 2014, there were no longer singers and performers on the stages scattered through the streets, and only a few young people roamed the streets without a clear purpose. Scattered on the sidewalks was  still the debris of celebrations. Among other things, I found a small plastic Israeli national flag connected to a spring - like a Jack-in-the-box designed to jump out when the lid is opened. What exactly did the producer mean by distributing such a toy?

In his Memorial Day speech, IDF Chief of Staff Benny Gantz made an unambiguous warning: "The calm is a deceptive illusion. Any spark might set off a conflagration". In a country usually addicted to the adoration of its army, whose citizens listen intently to any uttering made by any "security expert", this explicit warning was scarcely noticed. Citizens and policymakers chose to simply ignore it. So did the gung-ho military enthusiasts who placed the huge "Three Cheers to the IDF" banner on the street. Maybe especially they.

The Titanic continues full steam ahead towards the iceberg. 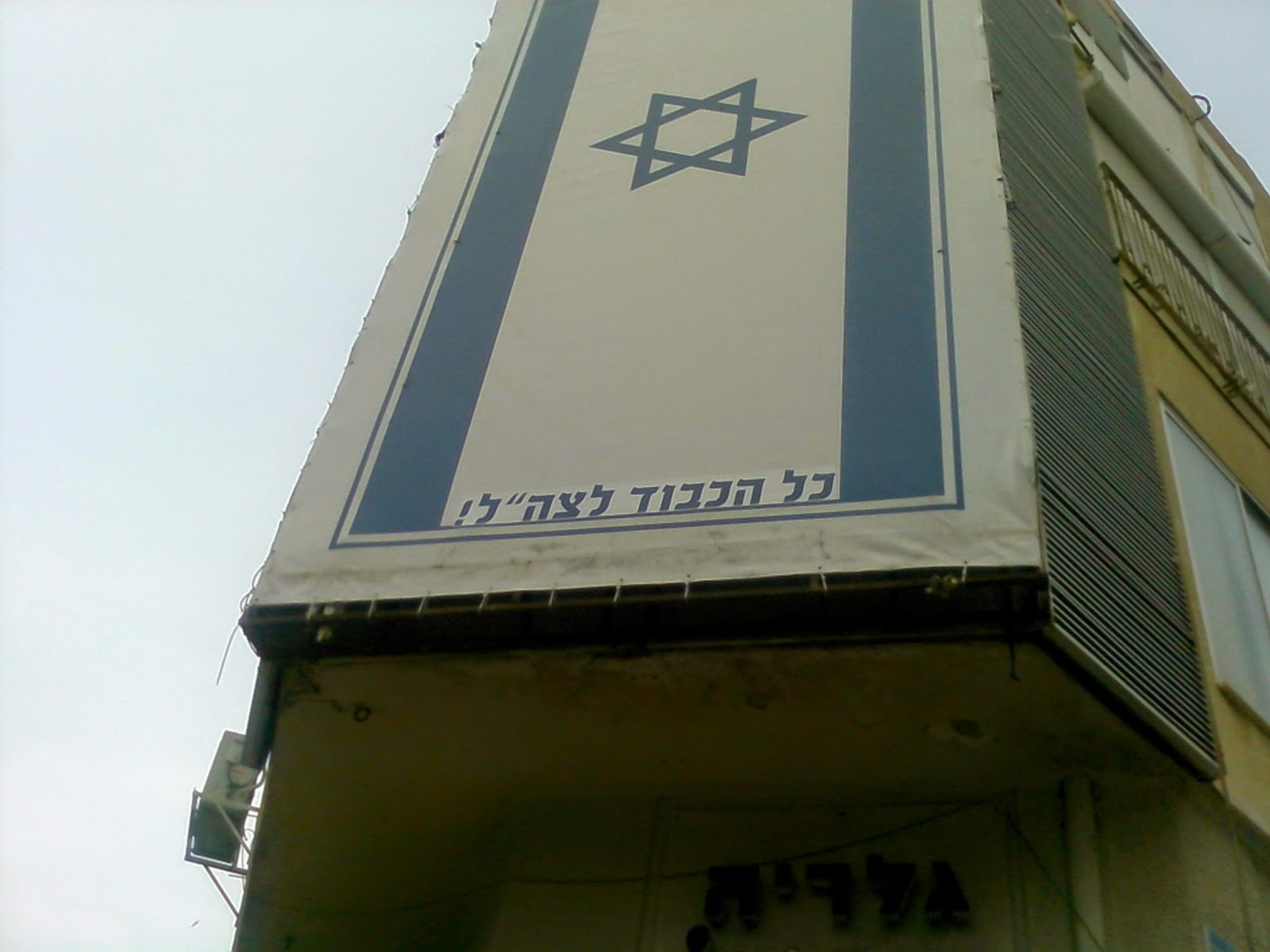 "Three Cheers to the IDF" 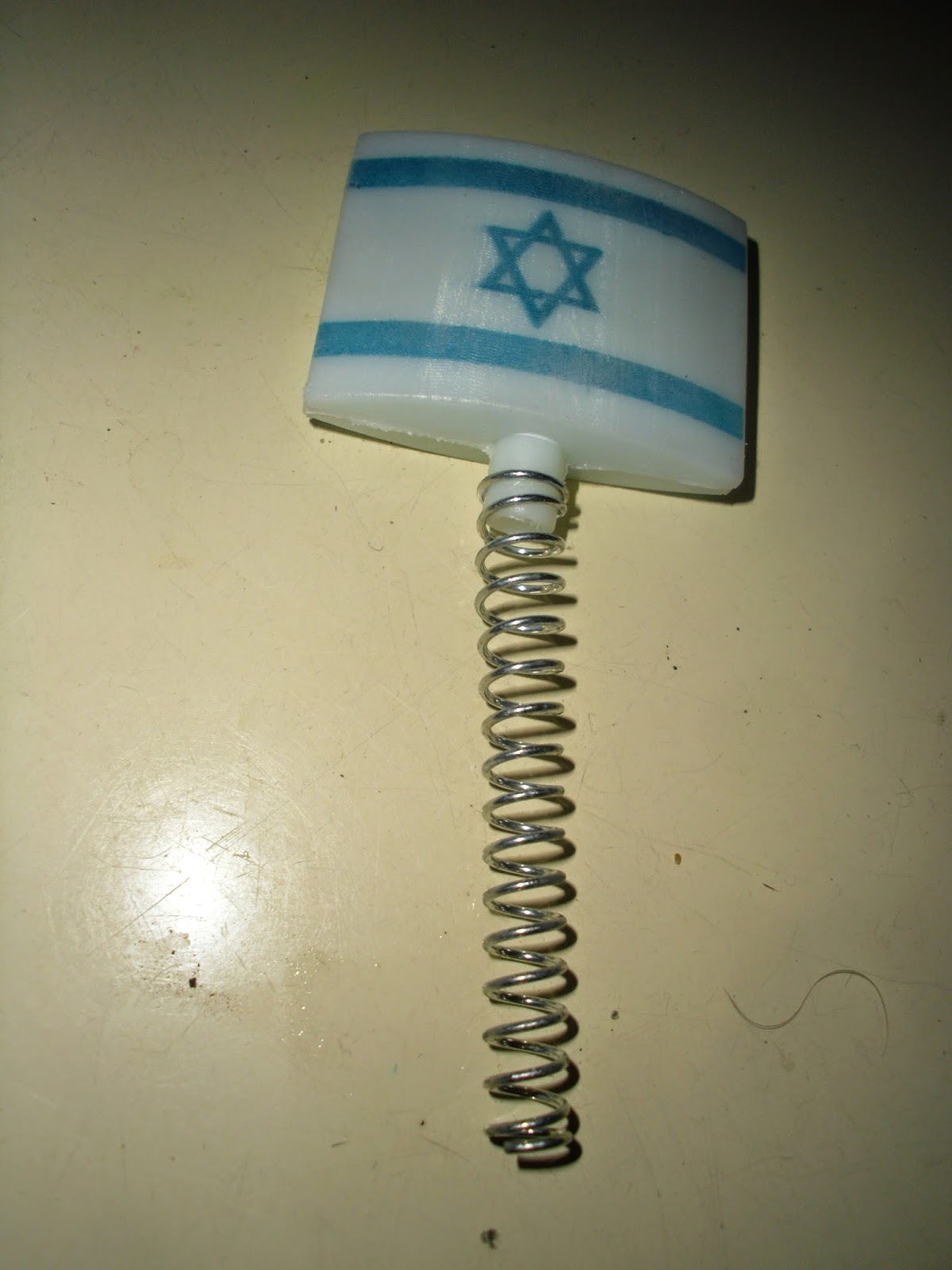 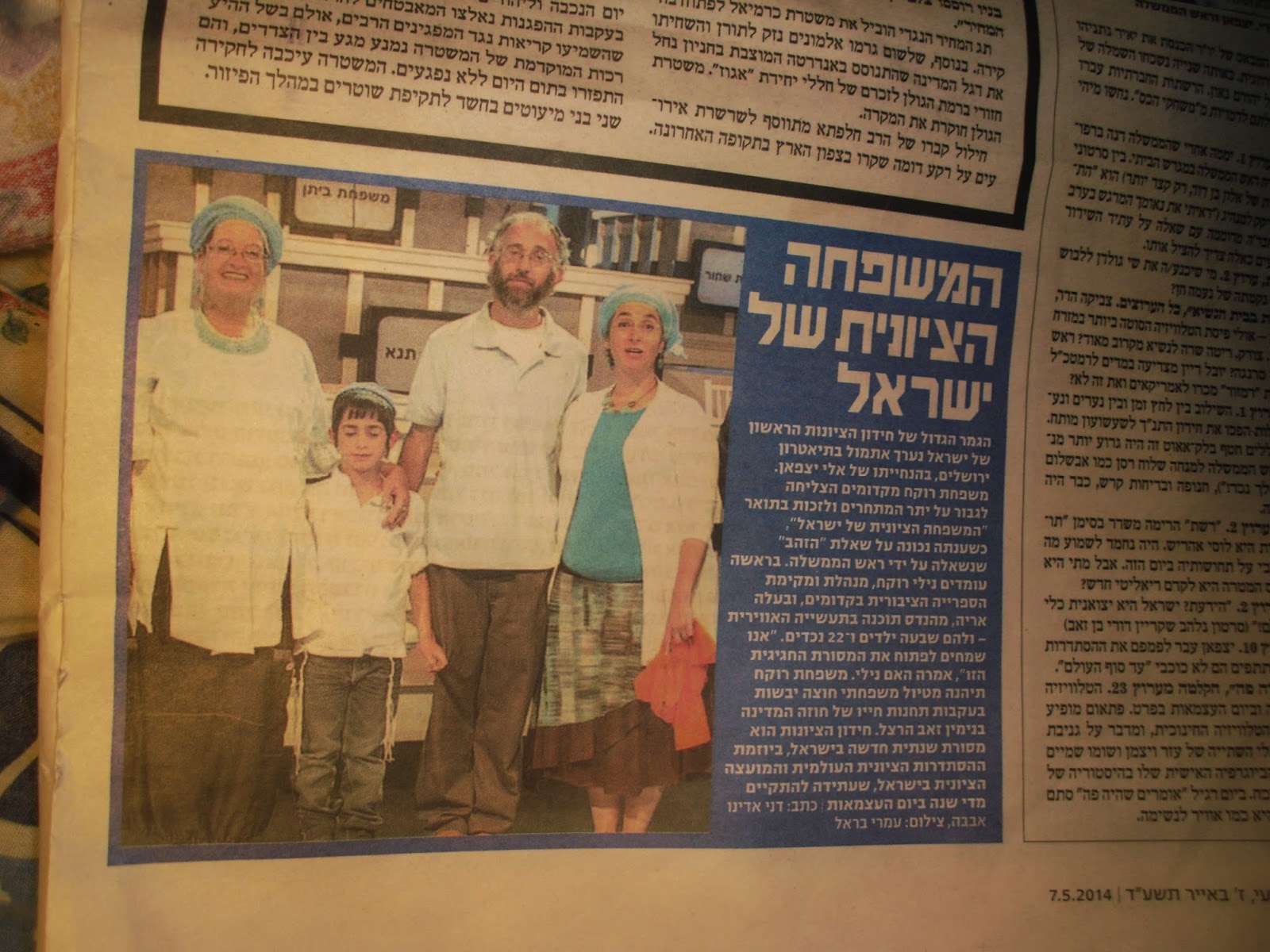 The Youths of Qaddum Village 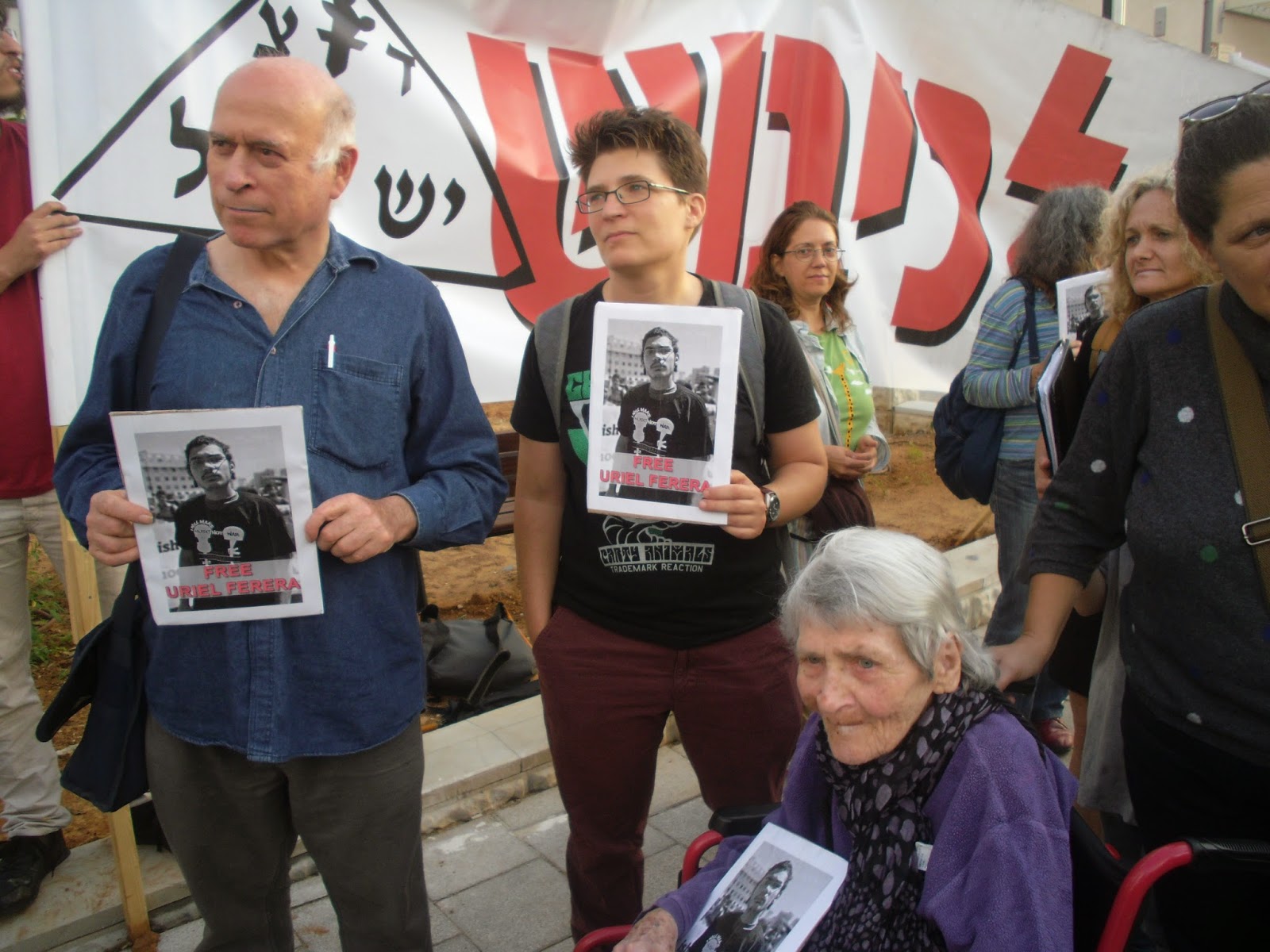