I am happy to host here the words of Alon-Lee Green, one of the organizers of the demonstration held last Saturday night in Jerusalem under the call "Standing  together - not giving in to despair".  After the links to media reports read about the planned Peace Now demo in Tel-Aviv, Sat. Oct. 24

On the minute when we got to Jerusalem, en route to the demonstration, a young woman asked us to accompany her to the Zion Square because she was afraid that “an Arab might come by”. We froze for a moment and looked at one another, two people who had come to take part in a demonstration against occupation and racism, but quickly we nodded and told her that sure, we will accompany her. We could well understand her very real fear, alone on that deserted street, even though it was expressed in a racist generalization which bothered us.

It is the same fear that I heard in the morning in the words of Arab friends which I asked if they were coming to the demonstration, and they explained that they did not feel safe to come to Jerusalem and be surrounded by so many armed security forces. And later, when we did get to the march, I saw the same fear in the eyes of many protesters at any time when a heckler on the sidewalk shouted "Death to the Arabs!" and "Traitors!". I felt this fear -  not a direct personal fear but a collective one hovering over an entire community, making everybody wary and jumpy – all throughout the march and rally.

But somehow, at the end, after listening to the Arab and Jewish speakers  from the podium and seeing so many determined people all around me, I knew that on that night we were able to accomplish  something very special. We have beaten the fear. Although dozens of extreme right goons were standing nearby, screaming racist abuse and dire threats, and even though the rally was surrounded by numerous police,  I think that all of us who were there, Jewish or Arab, felt a a kind of confidence and strength which we had not experienced since the wave of violence began. The security and intensity of standing together. 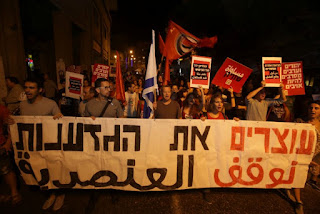 Jews and Arabs Rally for Coexistence in Jerusalem

Protesters march in the capital amid a wave of violence. 'Only together can we break the bloody cycle of occupation and hate," MK Dov Khenin says at the rally.

Some 1,500 Jews and Arabs demonstrated on Saturday evening in Jerusalem under the motto “we will not surrender to despair.”

The demonstrators marched from Gan Hasus ("Horse Park") in the center of the city to Kikar Hahatulot (“Cat Square”). A small group of right-wing protesters demonstrated at the endpoint of the march, with police separating the two sides.

The main demonstration was organized by a new joint Jewish-Arab group called “Omdim Beyachad” (“Standing Together”), which was formed in response to the current wave of violence. Members of the group have called for an immediate stop to the violence and the end of the Israeli occupation of the West Bank.

Among those attending the rally were Knesset members and representatives from Jerusalem’s Max Rayne Hand in Hand Hebrew-Arabic bilingual school. One of the rally organizers, Alon-Lee Green, said the timing of the demonstration during the current period of “despair and fear” sends “a message of hope and of another way.” He called for an Israeli-Palestinian peace accord and an end to the occupation.

At the rally, Meretz party chairwoman Zehava Galon called on Prime Minister Benjamin Netanyahu not to reject a new French-sponsored proposal at the UN Security Council  that would have international observers sent to Jerusalem’s Temple Mount. “At a time of unceasing and explosive tension when the national dispute is about to become a religious conflict, the government needs to take steps and back international initiatives to restore quiet and enable a calming of passions in advance of dialogue,” she said.

Links to articles about the demonstration

Join our march this Saturday, invite your friends and share the event:


These difficult days - days of violence, fear and pain - are only reinforcing our understanding that there will not be real security here until there's peace through a negotiated solution.

Only a political process that will lead to the end of our control over millions of Palestinians will end the bloody conflict between the two peoples and allow Israelis and Palestinians to live in peace and quiet. The only way to prevent further deterioration is through a two state solution.

Join us this Saturday -
*To protest the government actions that are pushing us away from a solution.
*To protest extreme right-wing provocations.
*To call upon Israeli society to choose a different path.

Posted by Adam Keller אדם קלר at 4:22 AM