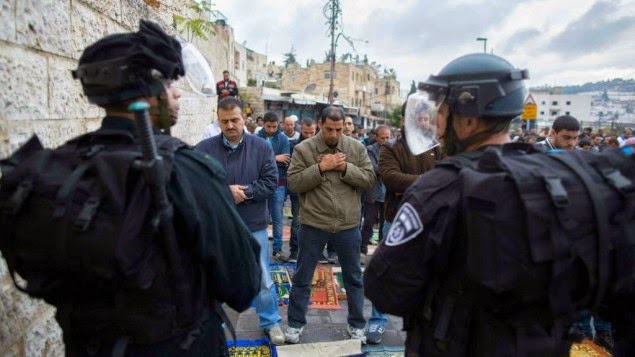 Precisely twenty years ago, the peace treaty between Israel and Jordan was signed. But nowhere were there celebratory events held to mark this date. It was marked in a different way – on the precise anniversary, Jordan filed a strong complaint to the UN Security Council demanding an urgent debate on the conduct of the State of Israel in East Jerusalem.

When Prime Minister Rabin and King Hussein signed that peace treaty, it was just a year after Rabin signed the first Oslo Agreement with the PLO Chairman Yasser Arafat on the White House lawn. At that time, when there were still concrete  expectations that a permanent agreement between Israel and the Palestinians would be signed by the May 1999 deadline, there was still room for dreams of establishing a real peace with Jordan, most of whose citizens are Palestinians, many of them in the territories under occupation…

"Netanyahu has given a final goodbye to the Bar Ilan Speech," wrote commentator Shalom Yerushalmi. "The same Prime Minister who once promised the Palestinians a state, had last Monday informed them on the  Knesset floor that there would be no 1967 lines, nor any other borders marked on the map, and no division of Jerusalem, and no Jordan Valley, and no  independent forces in the Palestinian state, and in fact there would be no negotiations. And to all these categorical rejections was attached a firm Netanyahu demand that Abbas recognize the Jewish state."

Not that that famous speech delivered at the Bar Ilan University in 2009 ever aroused ​​a lot of confidence or credibility. Nevertheless, there is some difference between Netanyahu trying to pretend and pay a bit of lip service for the sake of those who insisted on hanging some hopes on him, and the October 2014 model Netanyahu, evidently determined to take off all masks - and gloves. So there were very many events squeezed into this one week. There was the bill designed to allow the Knesset to enact laws violating basic Human Rights, even against the opposition of the Supreme Court. There was also Defense Minister Ya'alon's decision to prevent  Palestinian workers using Israeli public transportation, in compliance with the demands and assertions of the settlers which were extensively quoted in the media. Arabs on the bus are: “a security threat”; “sexual harassment”; “they stink and make great noise”; “and anyway why should we have to travel in a bus full of Arabs - this is a Jewish land, is it not?”
(Officially, the Defense Minister spoke only of "security problems", although in fact the military officers concerned had said there's no evidence of such problems).

There was this week also the sweeping announcement of the construction of thousands of settlement housing units, with the Prime Minister and senior ministers reiterating that engaging in such construction is the right and duty of Israel as a Jewish and Zionist state, “just as the English build in London and the French are building in Paris”. And Housing Minister Uri Ariel stating his intention to personally come to live among the settlers who penetrated into Silwan Village in East Jerusalem, in order to strengthen and encourage them; and the statements of Prime Minister Netanyahu on tightening his alliance with the Jewish Home Party of which Ariel is one of the leaders. And there was the highly publicized confrontation between the PM’s bureau and the White House, with insulting words flying back and forth over the Atlantic, and the expectation that it would escalate further after the Midterm elections to the US Congress, due next week.

Meanwhile,  war in Jerusalem. The spark which had set off East Jerusalem was the kidnapping, murder and burning of the boy Mohammed Abu Khdeir, blood feud for the kidnapping and killing of three Israeli yeshiva students. Since then the conflagration had been going on, also in the weeks when all attention was focused on the bombing of Gaza. Every week, almost every day, still more fuel is added to the combustion.  Israeli Nationalist-Messianic settlers penetrate deep into the Palestinian neighborhoods, take over houses on the basis of questionable purchase contracts, and effectively turn them into fortified compounds. Larger Jewish neighborhoods, established by the government on expropriated Palestinian land in East Jerusalem, are expanding through major projects involving thousands of housing units – with ordinary Israeli Jerusalemites, seeking a place to live, becoming unwittingly the pawns in a game of “expanding the Jewish presence” and driving wedges between Palestinian neighborhoods. The trains of the Jerusalem Light Rail, built a few years ago by a French company despite loud voices of protest and intended as “A symbol of United Jerusalem” had instead become identified as the focus of confrontation and conflict and clashes and constant stone throwing. It was at a station of the Light Rail that the baby Haya Zissel Baron was killed a week ago. Israeli citizens are convinced, without the slightest doubt, that the Palestinian who run her over did it as a deliberate pre-meditated act; many Palestinians say it was a car accident. The truth would probably never be verified, as he was shot and killed on the spot.

And topping everything else, the Al-Aqsa Mosque Compound - most sensitive place in the Middle East and one of the most sensitive in the whole world, Temple Mount to Jews, Haram al-Sharif (The Noble Sanctuary) to  Muslims. Two 1300-year old mosques, the third holiest site to a billion Muslims  worldwide, which were built on the site of the Jewish Temple destroyed by the Roman Empire two thousand years ago. In our time Nationalist Messianic Israelis, in increasing numbers and with increasing support in the political system, try to get hold of that compound, many of them speaking explicitly of their desire and intention to destroy the mosques and rebuild the Temple. They don’t shy away from the idea of confrontation with the entire Muslim World, to some of them it actually seems desirable. Activities to bring about Jewish control of the Mosque Compound were coordinated and organized tirelessly by a red bearded man named Yehuda Glick. Day before yesterday, he was severely wounded in an assassination attempt. The Security Services of Israel announced that within twelve hours they had solved the case and discovered the identity of the assassin. Was it indeed the real assassin? The truth would probably never be verified, since the soldiers and police took care to shoot and kill him immediately upon reaching his home. On the Israeli TV news last night  commentators said that it had been a relatively calm day in East Jerusalem, but reporters from the ground brought footage of confrontations and shooting  and clouds of tear gas over the alleys of the Old City.

Israeli correspondent Asaf Gabor went to the streets and cafes of East Jerusalem to meet the young rebels. He quoted the words of the 17-year old  Uday and the 18-year Mahmoud whom he met near the pool table in the cafe opposite the neighborhood mosque in Ras al-Amud. "We are not interested in the struggles between Hamas and Fatah - we think they're just spoiling our popular uprising here in Jerusalem, and of our friends in the Territories. The debates between our politicians are nonsense, they just make the Israeli occupation stronger, able to maintain the current situation, to increase  settlements and attack Palestinians. We don’t need movements to come and  organize us. Certainly not the Palestinian Authority or Abbas. We had only one Palestinian leader, Yasser Arafat. After he was poisoned by Israel, we now have no leader. After all, if Abbas wanted to come here, if he wanted to come even to   Shu’afat or Beit Hanina, the Jerusalem neighborhoods which are just ten minutes from Ramallah, he must get permission from Israel. So what kind of leader is he? For so many years he is talking about peace and the establishment of a Palestinian state, and we see nothing from it. Forget about Palestinian leaders, there is no such thing. What we have here is a rebellion which comes from within, because of the attack on our dignity, on us as Palestinians and on Islam. We don’t need anyone to tell us to go out or start a riot or anything. We are just organizing together and do it, because we are hurt. Israel does not understand one basic thing. The old ones have had their time. Now it's our turn, the turn of the young people."

Not quite by coincidence, the Government of Sweden – which last month  announced that it would recognize the State of Palestine when the appropriate moment came – have come to the conclusion that this week was the right time.  The Swedish recognition put some wind in the sails of the diplomatic efforts by  the PLO and the Palestinian Authority, in which young people in the alleys of East Jerusalem no longer have any confidence. Probably next week the Spanish parliament will debate a motion to also recognize the State of Palestine – of particular importance because in January Spain will become a member of UN Security Council, where Palestinian demands would be debated. Similar initiatives are known to be developing in other at other Parliaments in Europe as well. Yesterday, 550 Israeli citizens sent a supporting letter to Members of the Spanish parliament: "We, citizens of Israel, who wish a safe and thriving condition for our country, are worried by the continued political stalemate and by the continued occupation and settlements activity, which lead to further confrontations with the Palestinians and destroy the chance for a compromise. It is clear that the prospects for Israel's enduring existence and security depend on a Palestinian state coming into existence, side by side with Israel. Israel should recognize the State of Palestine and Palestine should recognize the State of Israel, based on the June 4, 1967 borders. Your initiative for recognizing the State of Palestine will advance the prospects for peace and will encourage Israelis and Palestinians in bringing an end to their conflict.". This petition was initiated and organized by Alon Liel, former Director General of the Foreign Ministry of Israel. A few years ago, he probably would not have signed such a letter, let alone initiating it.

This is also the week in which the large"Africa Israel Construction Company" announced that it would no longer engage in construction of the settlements, nor even in East Jerusalem – a decision not motivated by pure political reasons but also from considerations of economic gain or loss. And the Soda Stream company announced that it would close down its factory in the industrial zone of the Mishor Adumim settlement on the West Bank and move its operations to the Negev. It turned out that the highly publicized campaign ran for Soda Stream by actress Scarlett Johansson did not really help to curb the fall in its sales, and perhaps even acted as boomerang. And the Israeli shipping company Zim encounters increasing trouble unloading its cargoes  on the West Coast of the United States where groups of pro-Palestinian activists seek to block them. Anyone bothering to look closely would find several more warning signs, which might have gone unnoticed or ignored by decision-makers in the Netanyahu government.

This night, November 1, there will  take place in Tel Aviv's Rabin Square a rally commemorating the assassination of Prime Minister Yitzhak Rabin, rallying point for peace-minded Israelis. One of the announcements which landed in my message box states: "We can not forget the reasons why a Prime Minister was assassinated. We will  not settle for a vague condemnation of violence. We must speak out, loud and clear, say that this country must change direction, sign an agreement and put an end to the occupation which erodes and corrupts all that is good in our country."

Posted by Adam Keller אדם קלר at 7:00 AM