About budgets and growling bellies


The saying ”Prussia is not a country that has an army, Prussia is an army that has a country” is attributed to Count Mirabeau, a leader of the French Revolution. Quite a few of the Prussians of that time and the Germans of later  agreed to this assessment.

This week, the Tanin - new submarine of the Israeli Navy - arrived at the port of Haifa, and at the solemn welcoming ceremony Prime Minister Netanyahu declared it to be “A High Holydays gift to the People of Israel." The German government had built the submarine for the State of Israel, as part of the historical guilt that still affects many of Germany's relations with Israel, as well as a way of a guaranteeing jobs in the shipyards of Kiel. In modern Hebrew “Tanin” is simply the word for "Crocodile" in a foreign language, but in its  Biblical origin the Tanin was a far greater creature. The Bible often refers to the Tanin as a fearsome sea monster, which once fought a big war against God Himself. That is probably the true implication of bestowing the Tanin name on a submarine, which (according to foreign sources) carries nuclear-tipped  rockets and which, if ever given the order, could all by itself totally eradicate Tehran - or any other city in the Middle East.

For the time being, at the solemn ceremony in the Port of Haifa and the Cabinet meeting held on the same day, the military boasted an achievement of somewhat smaller proportions – the killing of  Marwan Kawasmeh and Amir Abu Eisha in Hebron. "ACCOUNT CLOSED: Israel killed the murderers of the three boys" declared banner headlines, followed by endless rhetoric from various politicians and public figures: "We embrace the soldiers who found the killers and risked their lives to restore  Israeli deterrence. Thank God for helping our soldiers perform this deed. Privileged they were to close with these bastards, these murderers, and do Justice unto them just before the  Day of Judgement. Murderers should not be alive. Let every enemy who rises against us know that, as the Psalmist said, “I pursued my enemies and overtook them, I did not turn back till they were destroyed”. A circle of evil had been closed at the beginning of the Jewish New Year, let it be a sweet good year to all the people of Israel”. Western newspapers are supposed to abide by the rule that a suspect is considered innocent until proven guilty in court - but not in the Israeli press and in this case. Anyway, the case of Marwan Kawasmeh and Amir Abu Eisha would now never come before any court.

Still another Israeli military achievement got into the headlines - the shooting down of a Syrian aircraft which penetrated into the airspace of the State of Israel (to be exact, into the airspace of  the Golan Heights, which Israel captured from Syria in 1967 and unilaterally annexed in 1982). True, the Syrian plane  penetrated only some 800 meters across the Israeli border, it turned back after a few seconds, and according to Israeli military sources the penetration was accidental while bombing the positions of rebels opposing the Assad regime who recently took control of the border area with Israel. Was it the best-advised action to bring down one of President Assad’s  planes on the same day that  the United States became Assad’s de facto ally in the fight against the ISIL beheaders? But maybe there is no need to look here for far-reaching political implications and motivations. Months ago, the directive was given to shoot down Syrian planes which would penetrate across the border. The plane did cross the border, there was an officer in charge who had to take a decision within one minute, he did make ??a decision and brought it down. Anyway,  Yediot  Aharonot gathered all three achievements of the Israeli Defense Forces – the submarine in Haifa, the liquidation in Hebron and the plane in Golan Heights – into a single impressive headline: "By Land, Sea and Air”.

But there can be no doubt that the biggest victory won this week by the State of Israel’s armed forces was in the battle against the Ministry of Finance of the same. The headlines announced it: "A compromise between Netanyahu and Lapid: 14 billion to Defence." Just hours before the New Jewish Year  holiday started, the Prime Minister's Office announced an agreements on the budget between Benjamin Netanyahu the Finance Minister Yair Lapid, agreeing that the Defense Ministry will receive another six billions to supplement its basic  budget in 2015, plus seven or eight billions to cover expenses incurred during Operation Protective Edge, so that the defense budget for the year 2015 will amount to 57 billions.

So, is this the end of the titanic struggle over the defense budget? Not precisely. "A senior defense official told Walla News: the approved budget is definitely not enough. That is unequivocal. This amount would force us to stop the army in its tracks already in the first months of the year, It would be very damaging in terms of acquiring and strengthening our equipment, including Iron Dome anti-missile missiles, and there will be no training of soldiers. It is clear to Treasury as well as to us that Defence will need - and will get – supplementary budgets in the course of next year, so why play these games?”

Will the army get this additional funding during the coming year? Certainly they will. The Army's hunger for additional budgets is unlimited, and so it its ability to sate that hunger. But who will not get any extras? The soldiers who serve in this army. A week ago, the topic suddenly burst into the media in big headlines: "Soldiers below the poverty line – they fought in Gaza, and have no money for food." “They risked their lives during the war in Gaza, but at the end of the operation, just before the High Holidays, many of them find it difficult to cope with fighting on another front: bank overdraft, debts and a growling belly. 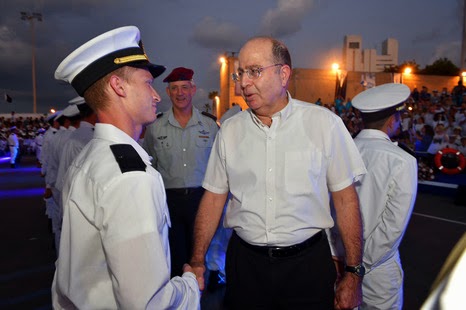 Defense Minister Ya'alon shaking the hand of an Israeli Navy cadet.
In ten years this young man might have his finger on the nuclear trigger -
but what will he eat in the meantime? (Photo: walla.com)

Shahar  (not his real name) is a Combat Engineering conscript and a lone soldier. His mother died, his father went abroad  and cut off all connections, and he has no family assistance. To support himself, his superiors allowed him to work occasionally. But in the past two months, during the fighting in the South, his overdraft in the bank has risen and reached a total of 15 thousand Shekels . As soon as Shahar returned from Gaza, he discovered dozens of angry warning messages on financial obligations and was informed that  attachment orders were issued against his meager possessions. "I don’t know what I'm going to eat. I am totally lost and don’t know where I will celebrate the New Year, "he said in a conversation with the Channel 2 TV news. The army is giving me 700 Shekels (appr. US$190) per month, this is beyond contempt. I have nowhere to turn to, the commanding officer told me there is nothing to be done. The banks don’t care that I fought in Gaza
And Shahar is not the only one. Idan (a pseudonym) serves at an Iron Dome battery and has a completely handicapped father and a mother who is frequently hospitalized at mental health institutions. He is due to end his term of compulsory service in a few months. "I used to work nights at a gas station and then delivered newspapers in the morning. I would return to the army after a night of hard work, nearly sleepwalking, but at least I had money, I would earn some 6000-7000 Shekels per month. But this stopped when the operation started. The officers said it is now war and I can’t go anywhere, nothing to be done about it. They told I had to be a full time soldier and not go to work outside. The war went on and my debts accrued interest, and now I'm in trouble. This is how it is to be a soldier in this country – they use you and throw you to the garbage. All the defense budgets go to the salaries of the senior officers, nobody cares about us. I am being discharged in a few months, I will go out into civilian life with huge debts. Others have parents who pay for their studies, I can’t dream of that.

Shifra Shahar, who heads the "Warm Home for Every Soldier" association which helps soldiers in distress, says that since " Protective Edge" the number of soldiers’ appeals for financial aid rose from dozens to hundreds per day. "Conscript soldiers do not get salaries, they just pocket money which is barely enough for cigarettes. They can’t subsist on that. Soldiers who manage to carry on are those whose parents support them., For more than 40% of the IDF soldiers this is not an option, and they are in a very bad situation”.

In 133 BC, the People’s Tiberius Gracchus came out into the Forum in the  city of Rome and
delivered a speech which went into history: “The beasts of the field have their caves to retire to, but the brave men who spill their blood in our country’s cause have nothing left but air and light. Without houses, without settled habitations, they wander from place to place. Their generals but mock them when, at the head of their armies, they exhort their men to fight for their sepulchers and the gods of their hearths, for among these numerous soldiers  there is hardly one Roman who has an altar that has belonged to his ancestors or a sepulcher in which their ashes rest. The private soldiers fight and die to advance the wealth and luxury of the great. They who are called Masters of the World have not  a single clod of earth to call their own.”

In Ancient Rome, this speech precipitated ??a huge political storm, opening decades of revolutionary social unrest. In the State of Israel of 2014, the soldiers who returned from Gaza into poverty made interesting topic for three or four days before the media turned to other issues. Indifference, not only to the fate of Palestinians.

Posted by Adam Keller אדם קלר at 8:14 AM