Conflagration on the island of stability 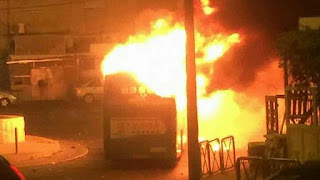 A burning bus at Ras el Amud, East Jerusalem
Photo: Jerusalem Fire Department
On Sunday last week, Prime Minister Netanyahu sent an official greeting to the citizens of Israel on the occasion of the Jewish New Year, telling them how lucky they all were. "Over the past year we have seen how special is the State of Israel. All around us, the ground is shaking - but Israel is an island of stability, of prosperity. We have established here a magnificent country, a free, vibrant, creative democracy, a beacon of sanity and progress" said the Prime Minister, adding, "Our first priority is to continue to surrounding the State of Israel with security fences."


Two and a half days after that graceful greeting, the Prime Minister chaired an emergency cabinet meeting concerned to address the conflagration raging in the city of Jerusalem, not far from his bureau - widespread riots, widespread clashes between police and Palestinian demonstrators, dramatic footage from Jerusalem getting to the focus of world news...

As in many past cases the spark that set off the Jerusalem conflagration came from the holy compound known to Jews as Har Ha-Bayit (Temple Mount) and to Muslims as Haram a-Sharif (The Noble Sanctuary).

This is the place where the Jewish Temple had stood - rather, two consecutive Temples, the second one of which had been destroyed by the legions of the Roman Empire in 70 AD. The Jews carried the memory of the Temple with them throughout their wanderings, and in their collective consciousness the Temple was cleansed from the corruption that characterized its priests during much of its existence and became the very quintessence of beauty and perfection, the ultimate dream of redemption for countless generations. After centuries of later Roman and early Byzantine rule, during which the site was used as a garbage dump, the armies of Islam came to Jerusalem. The Muslims cleaned up the garbage and constructed there the Al-Aqsa Mosque, which is for the past 1300 years the third holiest site in Islam, immediately after Mecca and Medina. According to Muslim belief, this is the place where the Prophet Muhammad arrived in his miraculous Night Journey on the back of his flying horse.

For many generations the Jewish religion was led by wise Rabbis who were well aware of the dangers inherent in a religious conflict over such a sensitive site. They found a sophisticated theological way to defuse this bomb, instructing the faithful that the Temple is too holy a place, not to be violated by the passage of mundane feet. Ascent to this awesome place should be postponed until the arrival of the Messiah. In the meantime, observant Jews were instructed to go on praying at the Wailing Wall, a remnant of the Temple - as they have been doing for generation after generation, century after century.

Nowadays, however, the Jewish religion – at least in the version dominant in Israel – has undergone a mutation. Increasingly, religious leaders are calling on their flock to ascend en masse the Temple Mount, to hold prayers there, drive a wedge of Jewish presence into the site and eventually destroy the Mosque and build the Third Temple instead. Once, this kind of "Temple Seekers" had been tiny groups, considered crackpots even in the right-wing milieu. Not anymore. Like other "wild growing weeds" in the Israeli society, they grew and greatly multiplied, gaining the open support of what passes for mainstream Knesset Members, including cabinet ministers.

The official position of the government of Israel is that Jews - and other non-Muslims - should have the chance to visit the mount. To that, as such, the Muslim authorities did not express any opposition – indeed, they sell admittance tickets from which a considerable source of income is derived. But in recent months, there is a constant increase in the number and size of organized groups of extreme right Jewish Israelis, who make no secret of their intentions and desire to become not visitors but landlords and eventually dispossess the Muslims. This inevitable brought an increasing number of incidents and confrontations. For some time the police began to prohibit the entry of Muslim aged less than fifty, but continued to allow the entry of Palestinian women. Thereupon, groups of Muslim women organized and clashed with right-wingers, who demanded that Muslim women be banned as well. In the past months police began a new procedure, to altogether prevent Muslims from ascending the mount in the morning hours, so as "to prevent attacks on Jewish visitors" - which aroused the suspicion of an intention to create a new status, with some hours reserved for Jewish prayer.

And so we came to past week - the week of the Jewish New Year. Most Israeli citizens took advantage of it for relaxation and recreation and barbequing in public spaces. But hundreds of religious nationalists announced their intention to celebrate the New Year by ascending Temple Mount and holding there a public prayer. They were led by Uri Ariel, Agriculture Minister in the Netanyahu Government, and among them were also the Young Guard of Netanyahu's Likud Party, declaring their determination to "assert Jewish Sovereignty."

To get around the police limitations, dozens of young Palestinians rushed to defend their Holy Site, arriving already on the previous night and camping at the mosques in order to face the Israeli right-wingers. In the early morning, a large police force raided the mosques in order to "safeguard the visit of the Jews" and had a very violent clash with the youngsters. Dozens of young Palestinians were detained and others were pushed into the mosque and the doors barred, whereupon Minister Ariel and his fellows arrived under heavy police guard. The Minister held an ostentatious prayer on the Mount and promised to return the next day.

Hearing the news, many hundreds of Muslims flocked to the mosques. The police began preventing the entry of "Muslim troublemakers" on the basis of lists of names and photographs compiled by the Security Services. The people denied entry clashed violently with police in the alleys around the perimeter of the Sacred Mount. The clashes quickly spread all over East Jerusalem. All along the winding "Seam Line" - separating Arab neighborhoods from the Jewish ones built on confiscated Palestinian land - there broke out riots, clashes and the hurling of stones, firecrackers and petrol bombs. An Israeli driver, the 64-year old Alexander Levlovitz, was killed in a car accident. Police determined that the accident was caused by stones hitting his vehicle, causing him to lose control.

Israeli media focused mainly on the death of Levlovitz - much less on the events which preceded it. The mass circulation papers competed in composing inflammatory headlines: "Alexander was murdered on the way the from holiday dinner" / "Rampaging Stone Terrorism!" / "The Stone Kills, A Stone is a Murder Weapon" / "Stop the Murderers!" / "In the Streets of Jerusalem, Terrorism Never Sleeps" / "A Capital City Under Attack!"/ "Stop the Leniency to Stone Throwers! "/ "Needed – an Iron Fist!". Indeed, in the emergency cabinet meeting, held at the heart of the PM’s Beacon of Stability and Progress, Netanyahu pushed through a whole series of harsh measures against stone throwers and against the parents of stone-throwers - heavy fines, requiring judges to impose long prison terms, changing the rules of engagement to give police more freedom to shoot, placing snipers to target stone-throwers from a distance.

Meanwhile, reactions in the international arena tend to point at the source of the problem – the attempts of a Jewish take-over of a Muslim Holy Place. Russia, the EU, the UN and the State Department all issued stern calls upon the government of Israel to strictly maintain and preserve the status quo and not permit any change on the Mount. King Abdullah of Jordan, whose Kingdom is accorded under the 1994 peace agreement an official status at the Holy Places in Jerusalem, warned that "Any further provocation or confrontation of police with Muslim worshipers at Al-Aqsa might damage relations between the two countries". For his part, King Salman of Saudi Arabia conducted a whole series of urgent and highly publicized phone calls with world leaders – starting with Putin in Moscow, through European Prime Ministers and Presidents and culminating with Obama - asking for their intervention to prevent a conflagration in Jerusalem. Just a few days before, Netanyahu confidential adviser Dore Gold, recently appointed Director of the Ministry of Foreign Affairs, boasted of the good relations which developed in recent years between Israel and Saudi Arabia...

And this morning, the UN Security Council unanimously and firmly called upon Israel to maintain the status quo at Haram A-Sharif – calling it by this and no other name. In vain did the Israeli Ambassador Ron Prosor complain of "a one-sided text which did not mention Palestinian stone-throwing".

At the same time, however, Netanyahu got on a different issue a far from inconsiderable consolation prize. At the urging of the US and with European support, The International Atomic Energy Agency rejected out of hand a proposal to subject Israel’s nuclear pile at Dimona to international inspection.

The combination of the two resolutions on the same day implies a wishy-washy message from the International Community: Israel is asked to thread carefully in its relations with Palestinians as a people and with Muslims as a religious community – but is given at the same time a free hand to maintain behind the scenes a nuclear monopoly, complete with submarine-mounted missiles which can wipe off the map any city in the Middle East - such an island of stability.