About a fishing boat and sitting ducks 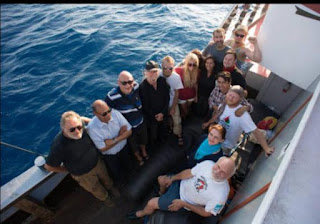 Photo: https://shiptogaza.se/
The Swedish fishing boat "Marianne", with a crew of international activists and a cargo of humanitarian supplies, had spent a month and half at sea en route from Sweden to Gaza. She hardly touched at any port on the way, as that could have led to her being detained. Indeed, even in the midst of a head-on confrontation with the EU, the Radical Left government of Greece continued a tacit agreement made with Israel by a previous government, and made trouble for two other boats seeking to join in breaking the siege of Gaza.


Eventually, the Marianne was boarded by Israeli naval commandos and towed to the Israeli port of Ashdod, but the Israeli media and political system seemed determined to keep a low profile on all this. Partly, of course, because the activists on board kept their pledge and offered no physical resistance, so there was no spectacular shootout on the high seas. Prime Minister Netanyahu condemned the activists for "going to Gaza rather than Syria" and "supporting the terrorist Hamas" - but it was in fact a rehash of a similar text already published last year and the year before. Asher Shechter of Ha’aretz pointed out the Orwellian logic of the government saying: "There is no blockade on Gaza, and if you violate it you will be arrested."
In fact, Israel itself is known to be in the midst of intensive negotiations with Hamas. And, following the alarming news of a massive offensive by ISIS/Da'esh on the Egyptian army in Sinai, the respected former general and government advisor Giora Eiland said in a radio interview: "Strange as it may seem, it is in Israel's interest to bolster the rule of Hamas in the Gaza Strip, as a bulwark against ISIS."
On the same day that the Marianne was taken over, the government gave in to Palestinian hunger striker Hader Adnan, promising not to extend his administrative detention in exchange for him ending his hunger strike. As on several previous cases - including one earlier involving Adnan himself - the Israeli military and security establishment feels that the price of a Palestinian hunger striker dying in Israeli custody is prohibitive. Indeed, such an event might set off the dreaded Third Intifada.
To prevent Palestinian detainees from using this means of struggle, the government prepared a law providing for the force feeding of hunger strikers. However, the Israeli Medical Association, headed by Dr. Leonid Edelman, has taken a brave and principled position: "The force feeding of hunger strikers is a form of torture. It is against basic medical ethics, and we would instruct all doctors to break such a law and disobey this kind of order."
A Third Intifada has not (yet?) broken out. But an increasing number of Palestinians, not belonging to any organization and therefore difficult to detect in advance, are taking action by whatever means they find available. In one such attack this week a young settler, called Malachi Rosenberg, was killed by bullets shot at his car. Even discounting the propagandistic tone of what was written about him in the mass-circulation papers, he personally seems to have been a decent young man, except for the fact of his living at an armed settlement enclave in Occupied Territory - and that decision had been made by his parents rather than by himself.

Settlers complained of "being sitting ducks when traveling the roads of Judea and Samaria" and demanded "firm action." Netanyahu immediately ordered the sealing of the East Jerusalem home of a Palestinian who attacked a synagogue last year and was then killed. The family, who had no known part in the attack on the synagogue, was thrown into the street.


At Malachi Rosenberg's funeral, Education Naftali Bennett said: "This wonderful child of ours, truly an angel ]alluding to the meaning of his first name[, was concerned with life, while our enemy is concerned with death. While we play according to humane Jewish moral laws, they act as bloodthirsty beasts." On the same day, in Geneva, the Israeli Ambassador walked angrily out of the session of the United Nations Human Rights Council. On its agenda was the report on the killing of more than 1400 civilians - a third of them children - in last year's Gaza War. "This report, this whole proceeding, is pure antisemitism. Israel is being singled out, like Jews were singled out and forced to wear a Yellow Star."
Outside the Geneva hall, the Ambassador was greeted by several hundred Jewish and Christian supporters, who had come there from Switzerland, France, Germany and Hungary - to wave Israeli national flags and hold up big signs: "I support Israel! I support democracy!" They also sung the famous peace song - the same which is sung at the (now rare) rallies of the Israeli peace movement, and which Yitzchak Rabin sang less than half an hour before he was assassinated. The words, which aroused controversy more than once during the last thirty years, sounded rather insincere in this setting.
An item which got strangely little attention: The City Council of Amsterdam rejected a proposal to enact a Twin-City agreement with Tel-Aviv - prominent party representatives citing Israeli policies towards the Palestinians. We have evidently come a long way since 1973, when the Dutch were the quintessential friends of Israel, targeted by an Arab oil boycott. Future historians might well count this as the most significant of all the events enumerated here.

Posted by Adam Keller אדם קלר at 9:37 AM