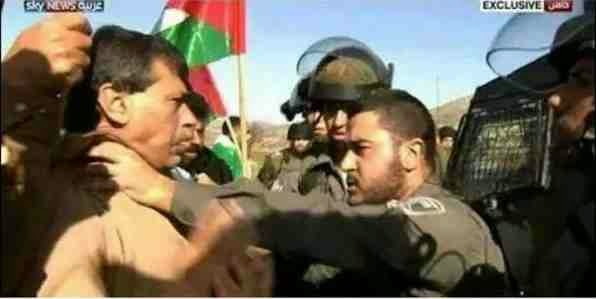 Is the death of Ziad Abu Ein going to be the spark which would set off the great conflagration of the Third Intifada, which has long been talked of? Probably not yet, although yesterday afternoon came the news of a Palestinian throwing acid on the passengers of an Israeli car - apparently yet another case of an act of violence undertaken at an individual’s personal initiative without any  organizational guidance.
Even after this violent death of one of their own senior  people, the Palestinian Authority and PLO, under the leadership of Mahmud Abbas, seems determined to continue the delicate balancing act: militant rhetoric and diplomatic offensive, combined with continuation of “security coordination” with the Israeli security services which is highly unpopular with grassroots Palestinians. This could be maintained for some time yet, at least as long as there seems a chance for the diplomatic approach to achieve concrete results.
In a little over two years and a half, on 5 June 2017, a symbolic date is due  - a precise fifty years since the occupation of the West Bank and Gaza Strip by Israel's armed forces. If this symbolic date passes without a significant change in the situation, it will be hard for the State of Israel to continue arguing  that its rule over the Palestinians is just "temporary”.
Three ongoing processes take part in a race against time towards this symbolic date - the changes taking place in the Israeli political system, the diplomatic process led by the Palestinians in the international arena, and the growing escalation of violence on the ground. Which of them will be the first to arrive at the finishing line?
The petition of Israeli citizens, calling upon European parliamentarians to support recognition of Palestine, continues to gather momentum. Among the latest to join more than 900 signatories are the writers Amos Oz, A.B. Yehoshua and David Grossman, as well as singers Achinoam “Noa” Nini and Mira Awad.
Dalia Yairi-Dolev is a well Israeli radio broadcaster, writer and poet. Her first husband was Colonel Uzi Ya’airi, killed in battle with Palestinians in 1975. Though considered broadly dovish in orientation, she never took an outspoken political position, and on one occasion was invited by AIPAC to address the lobby’s annual conference in Washington. She has now decided to strongly endorse the petition to the European parliamentarians:

This petition is an outspoken declaration, aimed at underlining how vitally important this issue is for us. It expresses the aspirations of the generations who were born and grew up here, dreaming of a country with secure borders, a country which invests its resources in its citizens, in education, in health services, in the standard of living, in the quality of life. A democratic, egalitarian state whose army is in truth “The Israeli Defense Forces” - an army which knows how to defend and safeguard both security and peace.  This petition expresses how deeply these generations long for quiet, for peace – all of them, those who were born before the state was set up [like Yairi-Dolev herself], and those who were born afterwards, and those who were born to these and grew up and undergone military service. Longing for peace, for a clearly defined  state of our  own. Better a cold peace with soldiers guarding a clearly-delineated border than a military involvement among a hostile population. A state is an entity, a clearly defined “address” of those whom we face. A Palestinian state is not a gift to the Palestinians. It is a gift to ourselves. It is our liberation from the chains binding us to them. Creation of a Palestinian state is the Palestinians’ share in the process of their divorce from us. There are those who try to draw us into a trap of fear and demagogic threats, as if the creation of a Palestinian state is a threat to us. It is not a threat, it is a promise. A promise of normalization, of a future.

http://www.atzuma.co.il/toparliaments?fb_action_ids=759028177510240&fb_action_types=og.comments
(English text of the petition after the Hebrew)

Posted by Adam Keller אדם קלר at 9:14 AM