The Emperor is naked

At 10.30 pm the website of the Palestinian news agency Ma’an bore an ominous headline: “Ceasefire falls apart in final hours, with no renewal in sight; Palestinian negotiators charge Israel has refused to accede to Palestinian requests”. So, the opposing negotiating teams – which had not met face to face, but sat in adjoining rooms with Egyptians passing messages to and fro - left Cairo. Even before the end of the of 72-hour ceasefire three rockets were shot from Gaza at the southern Israeli city of Ashkelon and intercepted in the air by Iron Dome. Israeli ground forces were moved closer to the Gaza border, and commanders made dire threats of “a new ground invasion of Gaza – far deeper than the previous one”.

A friend from Luxembourg wrote “I just communicated with my friend in Gaza, they are already in such a desperate situation. Do you think there is still a chance to prevent a new round of bombing?”  I wrote back “It does not look good but we still have an hour until the ceasefire expiry, on Midnight Middle East  time. That would be 11pm in Luxembourg”.  She wrote: “I cross my fingers”.

And then, forty minutes before Midnight came the reprieve. After all, the cease-fire had been extended for 72 hours, which was immediately amended to 120 hours, a full five days. There was still a brief raid by the Israeli Air Force on nine targets in the Gaza Strip to retaliate for these three rockets at 10pm, but the targets were “chosen with surgical precision in order to avoid casualties” (if only they had done that earlier). And then things calmed down, and the ceasefire went into effect. At least for the next five days, the arena would be occupied by the wrangling of diplomats and politicians – Israelis with Palestinians and Egyptians and Americans and Europeans, and also Israelis with Israelis and Palestinians with Palestinians.

Precisely what did happen behind the scenes in these tense last hours? Commentator Yossi Melman today compared it to the Chicken Game made famous by a James Dean film, where two drivers drive towards each other on a collision course and one must swerve to avoid a mutually destructive collision.
So who did swerve?

Already a week ago Melman used Hollywood imagery in order to explain the Cairo talks: “The Head of Egyptian Intelligence is making to the Hamas leaders a Godfather-style offer”, he wrote, “an ‘offer which can’t be refused’: first you have to accept immediately and unconditionally a 72-hour ceasefire and come to Cairo, then we talk about everything else”.

What did happen in the action-packed week between the Godfather commentary and the Chicken Game? A short recapitulation: Hamas representatives came to Cairo, to hold indirect negotiations with the Israelis; they were informed by the Egyptians at the very outset that the issue of a seaport and airport in Gaza was off the agenda and would not be discussed; they made an angry retort, accusing the Egyptians of being “Netanyahu’s stooges”; they refused to renew the first 72-hour ceasefire, let it break off and engaged in several days of renewed exchange of rockets and bombings; after three days of this they consented to a new 72-hours ceasefire; they went back to Cairo – whereupon the Egyptians came up with a new offer, namely that the issue of a Gaza seaport and airport will be on the agenda within a month.

A month is a long time in Middle Eastern politics, and Israeli governments have wriggled out of obligations far more specific and explicit than this. Still, there is some difference between “Out of the question!” and “Let’s talk about it next month”. Enough, it seems, to make even perennially suspicious Hamas  decide to give this diplomatic track another try and spare the people of Gaza the horror of  a new round of bombings. At least for five days.

And more had happened in the past two weeks – especially in the international arena. The images of death and destruction from Gaza were seen on TV around the world and made a profound impression, and even the horrors emanating from north Iraq failed to overshadow them (as Netanyhau may have hoped). On November 9 there was the world-wide series of demonstrations in solidarity with the Gazans. In particular, the one in London drew a crowd of 150,000 – one of the largest demonstrations on any issue which the British capital saw in recent  years. Israeli exporters were alarmed to hear that European supermarkets no longer wanted to have Israeli fruit on their shelves, since the sight of it angered many customers. Moreover, the European Union informed Israeli dairy producers that as of September 1, dairy products originated at settlements in the Occupied Territories would be altogether denied entry to the European market. The Spanish government declared an arms embargo on Israel, which the British threatening a similar step should the fighting in Gaza resume. Then came the disclosure in the Wall Street Journal  that the Obama Administration had stopped a shipment of appropriately named Hellfire missiles to Israel, apparently out of anger at the Israeli military using American arms in the killing of Gazan civilians.

Then, there was the UN Human Rights Council in Geneva deciding to set up an investigation of Israel’s deeds in Gaza, similar to the Goldstone Commission which investigated the Cast Lead Operation of 2009 and which caused Israel great damage on the international arena. Being engaged on a full-fledged campaign to de-legitimize in advance the UN investigation, can Netanyahu afford to restart a full-fledged military assault in Gaza, inevitably entailing further mass destruction and killings? By all sober calculation, he does not really have such an option, whatever dire threats are made by generals and  hawkish ministers.

But  Netanyahu also has no real option of just letting the war in Gaza taper off inconclusively, with desultory shooting going on in the border region. Such an outcome would be intolerable to the inhabitants of southern Israel, who had suffered considerable hardships in the past month – much less than the inhabitants of Gaza, to be sure, but much more then the inhabitants of central Israel. At the moment idolized by the country’s mass media, inhabitants of the South are in a position to exact a prohibitive political prize from Netanyahu.

On the day after the ceasefire was extended by five days, inhabitants of the South streamed  into Tel Aviv to hold a mass rally in the Rabin Square. It was far from a peace-oriented event. Speakers – mayors and local politicians from various towns in the South - demanded that Netanyahu “Solve the problem once and for all, put an end to the shooting and restore calm to the border area, either by military means or by diplomacy”. Had the government sent the army into an all-out campaign to conquer Gaza, these might have become the most vocal of cheer-leaders. But should the military option be taken definitely off the table and a comprehensive political solution for Gaza substituted, some of the same people might lend it their support.

On August 10, Yediot Aharonot published very prominently a letter written by Tomer Bar Gil, a child from Kibbutz Nirim on the Gaza border:

My name is Tomer and I am ten and a half years old.

I live in Kibbutz Nirim, less than two kilometers from the Gaza border. For a month, during the war, I was staying with my uncle and aunt ​​in the North. Three days ago we were told that we could go back to Nirim because the shooting from Gaza had stopped. I was very happy to go home, to my own room, to my games and books. But on the next morning the 72-hour ceasefire ended and there was a Code Red alarm,  and then another alarm, and also mortar shells fell without the alarm sounding. Then I felt we have been told in vain that we can come back to live here, but in fact we have been brought back into an unsafe place. I try to convince my young brother to come out and play football, but he is afraid a missile would fall. Even the steps of my father at home are frightening because they sound like explosions, and I get frightened when a dog is barking, because they sense the Code Red alarms and start barking already before people hear the alarm.

I think we can’t go on like this. On the one hand our life is in danger, on the other hand you can’t just leave your home and run away all the time.

I don’t want this condition to continue. I know that it can be solved and I want the solution to happen already. I am angry with the government for not making a peace agreement with the Palestinians and only attacking them. This is bad for all of us. I want the world to help us make peace with the Palestinians, because then we and they will have a better life. 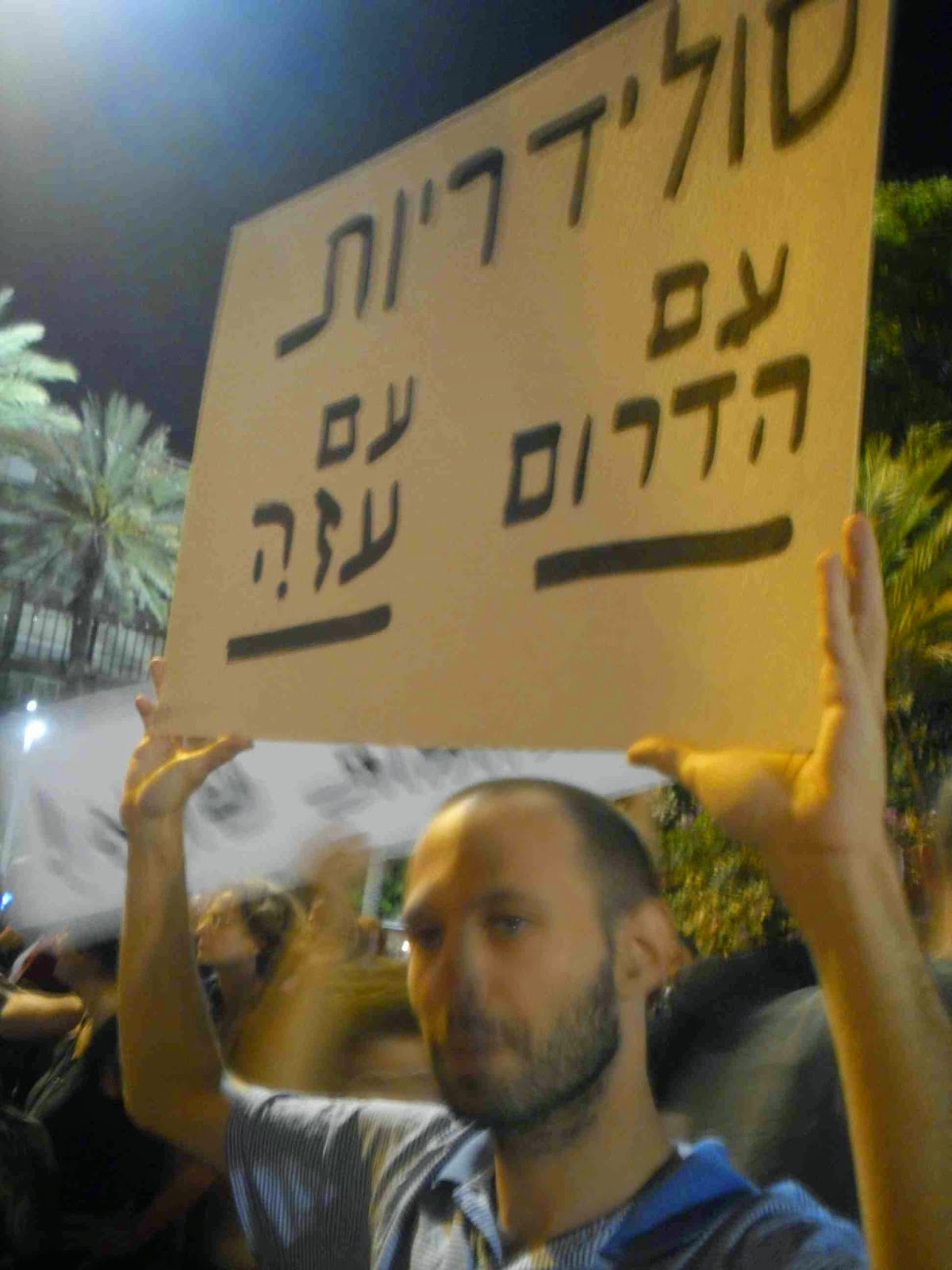 "Solidarity with the South and with Gaza"
sign at Tel Aviv anti-war demo, Aug. 9 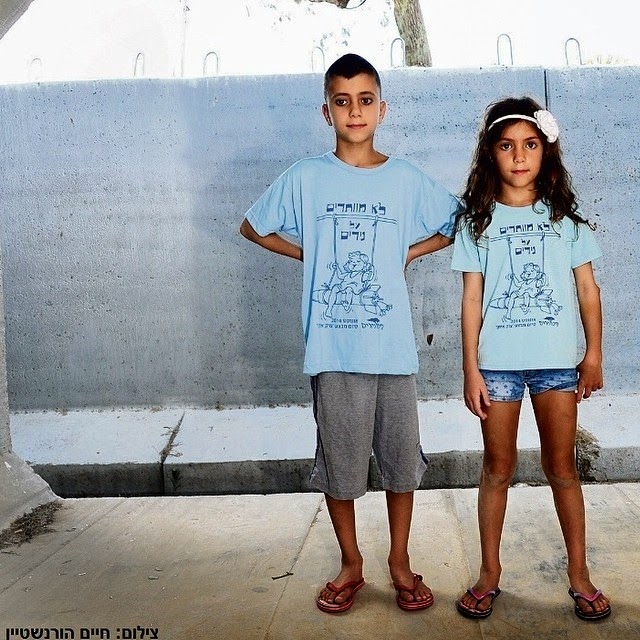 Tomer with his sister Ella, standing in front of
a protective wall (photo Yediot Ahronot)