On Wednesday afternoon I went into our neighborhood pizzeria and noticed that their TV was no longer tuned to the non­stop 24­hour war channel. Rather, there was a non­Israeli music channel featuring a Spanish guitar player. That evening came the news that the army had presented to the Inner Cabinet a detailed plan for the complete conquest of the Gaza Strip, forecasting months of fighting and hundreds – possibly thousands – of dead Israeli soldiers. Even the outspoken cabinet war hawks Lieberman and Bennet shied away from supporting that plan.

So, it looked like the tide was turning and that the State of Israel has come up against the limitations of its mighty power. The atmosphere seemed to be improving a bit, with some fissures in the "war mania consensus", and such staunch mainstream commentators as Nahum Barne’a and former Mossad Director Efraim Halevy started to change their tune a bit.

The maverick Ari Shavit tried to analyze seriously how the past month affected us. The unexpected fighting abilities exhibited by Hamas, which had spent years preparing for this war, have broken up the complacency in which Israel had lived in the past decade. Feeling secure in overwhelming military superiority, Israeli society had shrugged off Kerry’s feeble attempts of peace­making, confident of an ability to “manage the conflict” without solving it. Israel was to go on indefinitely as “a villa in the jungle”, a prosperous high­tech enclave splendidly self­isolated from the stormy region all around. But it was a wafer­thin false security, as evident by how easily it was shattered and replaced by a deep­seated anxiety.

The success of Iron Dome in deflecting the missiles shot from Gaza, making it
possible for life to outwardly continue as normal in the cities of central Israel, was far from making Israelis feel truly secure. The panic around the Hamas cross-border tunnels was understandable for inhabitants of a kibbutz two kilometers from the Gaza border: “They could at any moment burst out of the earth and kill us all!”.  From Tel­-Avivans the same outcry probably refers to issues far deeper and profounder than physical tunnels dug in the sandy soil of the Gaza border zone.

Israel might count itself lucky that the war with Iran, towards which Netanyahu was pushing for years (and on preparing for which he spent a great deal of money) is (hopefully!) not going to happen. It might have been an even more rude and painful wakeup call.

Yesterday night I went to bed hoping that the tide was truly turning, that a UN/US brokered 72­hour ceasefire would be the beginning of long­overdue negotiations, with our side woken up from the illusion of omnipower and ready to talk rather than dictate. This morning had seen a new rude awakening, the Gaza avalanche not stopped but gathering an even greater destructive momentum. The prime minister’s nightmare has come true – once again an Israeli soldier is in the hands of Hamas.

Tens of thousands of Israeli soldiers had been introduced into the Hamas’ home ground of the Gaza Strip, and Hamas managed – as they announced in advance they would – to use the opportunity and capture one of them (“kidnap” as official Israeli statements put it). Until now, Israeli society had
been extremely sensitive to soldiers held in captivity, and ready to pay very high prices in order to get them back. Would that still hold with regard to Second Lieutenant Hadar Goldin?

Who has broken the ceasefire? During the night, Israeli forces had advanced into the Rafah area so as to create a fait accompli before the 8.00 ceasefire deadline and take possession of several square kilometers of ground they had not held before. Strictly, that would not be considered a ceasefire violation, though it would not exactly be an act in good faith. (Good faith is in extremely short supply on either side to this conflict...) Israeli forces then proceeded to uncover and prepare to destroy a Hamas tunnel discovered in this same area. And then, apparently, the tunnel disgorged Hamas fighters who killed two soldiers and captured one and carried him with them back deep into the earth.

Did all this happen at 7.00 before the ceasefire was to enter into effect, or at 9.30 when it was supposed to be in force? Did the ceasefire terms entitle Israeli forces to go on blowing up tunnels in the areas of Gaza presently under their direct control? Did the ceasefire terms entitle Hamas fighters presently inside these tunnels to do something about the possibility of the tunnels and themselves being blown up? Did the ceasefire terms refer at all to these complicated issues? Diplomats might long argue about all this, and a Professor of International Law might eventually set it as an interesting thorny problem to his students. To thirty-five Palestinian inhabitants of the Rafah area, killed in the immediate massive Israeli retaliation, all this would no longer make any difference.

The madness goes on.

We continue to call for an immediate cease fire, putting an end to the war and bloodshed, while simultaneously seeking a political solution

Stop the attack on Gaza!

War does not lead to security, it merely claims more and more causalities.

Say yes to a political solution that will make possible a secure life for both people.

*** There will be assigned stewards. Please follow their instructions as for the location of the protest, the conduct during the protest and the dispersal***

We ask that all participants will avoid any violent conduct.

Coalition of Women for Peace & The Da'am Workers’ Party 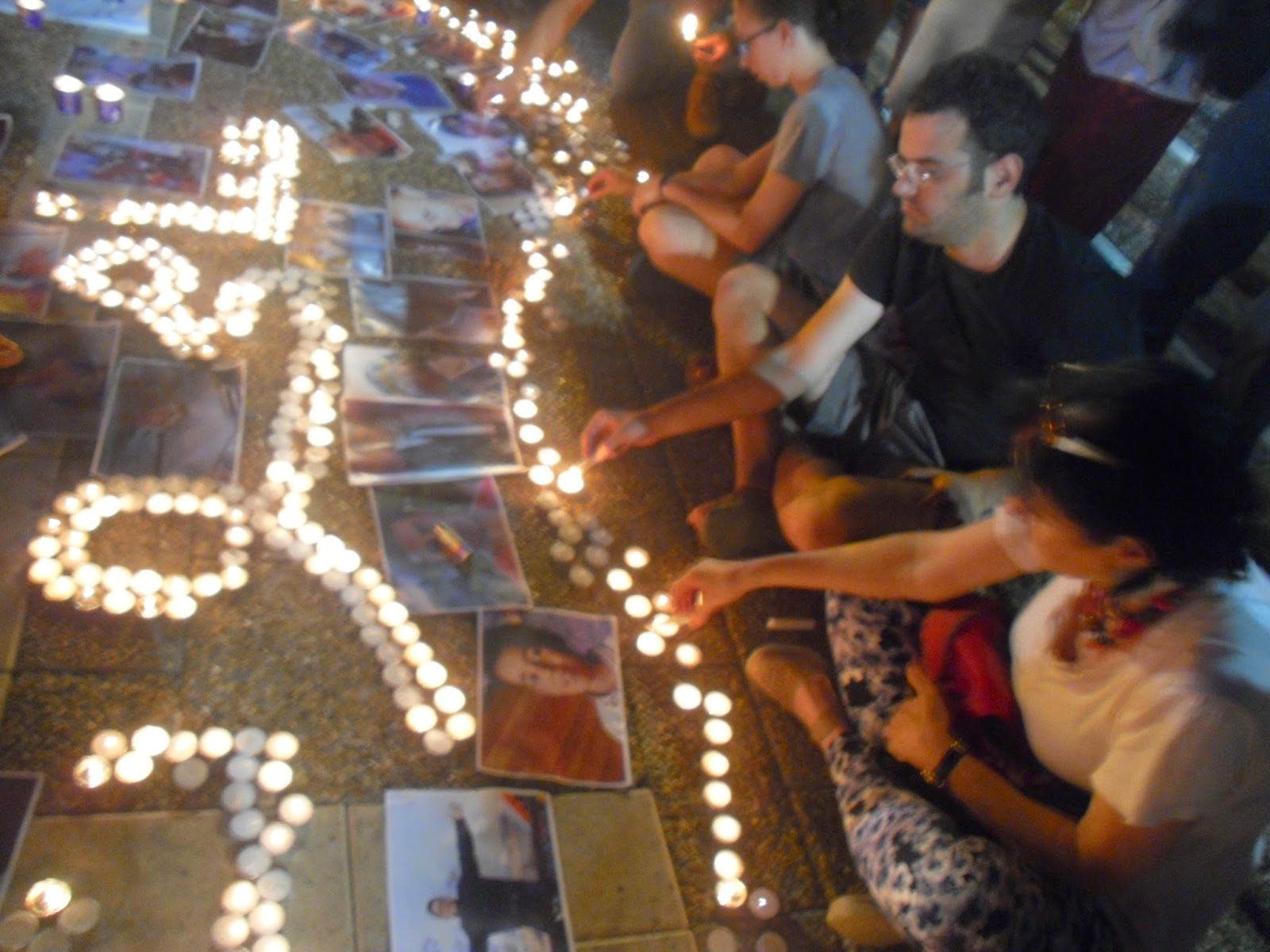 Lighting candles at the Rabin Square in Tel Aviv,
in memory of all Palestinians and Israelis killed in the Gaza War.
Posted by Adam Keller אדם קלר at 10:57 AM