Until the last secular soldier

Last Friday, the inhabitants of Bil'in marked nine years since the beginning of the struggle which had turned Bil'in from one Palestinian village among hundreds into a household word. On February 20, 2005, bulldozers had began uprooting olive trees on the designated route of the Separation Fence/Wall/Barrier on the land of Bil'in. That same day, the villagers held their first demonstration against the Wall - the first in the line of demonstrations which were since then held every Friday, with the villagers and those who came to stand with them encountering  countless volleys of tear gas and rubber-coated metal bullets. Two residents of Bil'in, Bassam Abu Rahma and his sister Jawaher, paid with their lives. Many others sustained serious injuries or spent considerable time in Israeli detention.

The purpose of the construction of the fence along the route designated for this sector was clear and obvious: to cut off half of Bil'in’s farmland and make it available to the Israeli settlement of Modi'in Illit. Modi'in Illit is the largest settlement in the West Bank, a real city, having some thirty thousand inhabitants and its mayor speaking about future plans to reach the figure of three hundred thousands.  The Bil'in residents appealed to the Supreme Court in Jerusalem.  and after years of deliberation the judges ruled that the land in which the settlers had not yet built would be returned to the residents of Bil'in, while the settlers could retain possession of the part where the olive trees had already been uprooted and neighborhoods of crowded four storey building erected (without  building permits and in violation of both Israeli and International law ). Two further years of foot-dragging by the army were needed until the Supreme Court ruling was actually implemented and the villagers regained about a third of the land which was stolen from them. Residents decided not to leave it at that, but continue their popular struggle until the Fence would fall, all village land given back and the occupation ended. 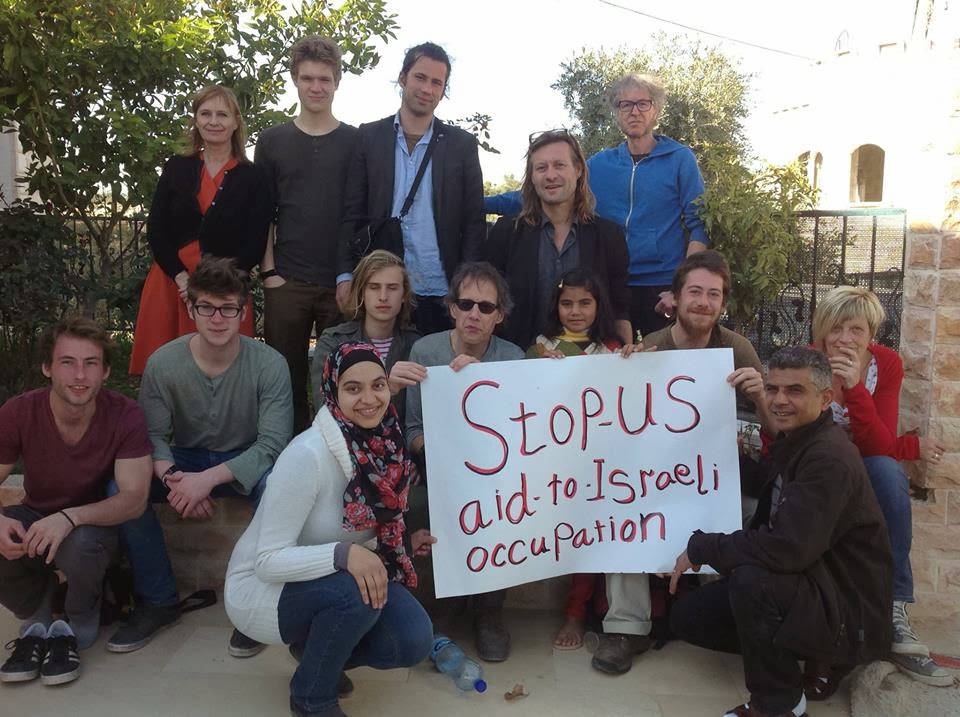 Group photo of the Belgian delegation in Bil’in

The Nine Years’ Anniversary Demonstration was a bit larger than usual, with the participation of a group of specially-arrived Belgian activists, but it was not really extraordinary. Like every Friday, hundreds of people concentrated near the mosque in the center of Bil'in, beat drums and waved flags and placards and marched towards the Wall. Once there, a confrontation soon developed between soldiers shooting tear gas and stone-throwing youths. Most of the time, demonstrators could only see the soldiers as anonymous figures clad in helmets, who rose for a moment behind the wall,  fired another volley of gas and bent down again . Only briefly was there a kind of dialogue: "Now, now , that’s enough, go home!" Called one of the soldiers . "This is our home! " answered one of the village youths in Hebrew. The soldier responded with some more tear gas.

A  video from the Bi’lin demo on Feb. 28, 2014, prepared by David Reeb
http://www.youtube.com/watch?v=kQIXV7NZ_c8&feature=youtu.be

The conscript soldiers standing on the Separation Wall and firing tear gas had arrived there from towns and villages from all over Israel. There is one place from which none of them came: the huge settlement of Modi'in Illit to whose protection they were stationed. Modi'in Illit is a Haredi (Ultra-Orthodox) settlement. Strange as it may sound, the residents of Modi'in Illit define themselves as “Anti-Zionists”.  That is, they have no objection to living on land which was taken by force from Palestinian villagers and getting the protection of the Zionist army against the anger of the original landowners, but they have objections - very strong objections indeed - to serving in the army which protects them.

Two days after the demonstration where Bil'in residents encountered barrages of tear gas, a bus convoy set out from the other side of the Wall to join the mass Ultra-Orthodox rally held in Jerusalem to protest against the new law which is supposed to apply to them the duty of military service. " Please don’t try to force us to join the army” pleaded one of the young Modi'in Illit settlers who talked to a radio reporter at the rally. "We want to dedicate our lives to the study of the Holy Torah, to Torah studies and nothing else. If you force us to go to the army it would be like taking fish out of the water."

"Torah study is crucial to the future of the Jewish People, it is no less important than the army" said in the same radio broadcast Knesset Member  Yisrael Eichler, one of the most prominent speakers of the Ultra-Orthodox camp. "For example, President Obama is now plotting to take away the Land of Our Ancestors in Judea and Samaria. If Torah scholars do not pray and ask for God's mercy and intercession, who will save us? ". Veteran radio broadcaster Arye Golan asked: "So, you are supporting a right-wing political program, and you want to fight for it until the last secular soldier? " "God forbid!” reacted the unperturbed Eichler. “We are praying every day for the soldiers, praying that they will all return safely from their tasks."

Apparently, what was is also what will be. The new law would apply the duty of military service to the ultra-Orthodox only in four years - and many are skeptical that it will ever be implemented.

So for quite a long time still the Ultra-Orthodox Modi’in settlers can continue, on Bil'in lands, to study the holy Scriptures under far from holy army protection.

Posted by Adam Keller אדם קלר at 9:10 AM