The return of De Gaulle? 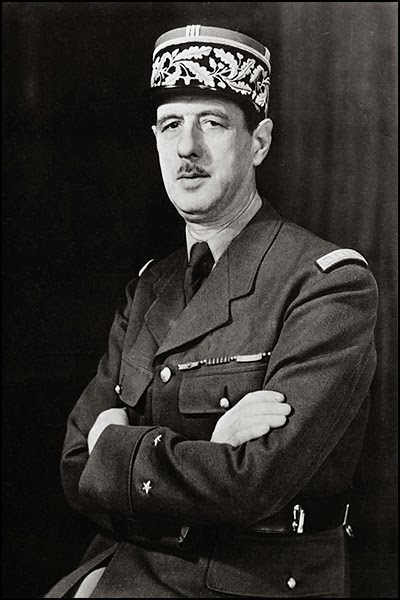 The commotion started with the press conference that Prime Minister Netanyahu convened to sum up his participation at the economic conference in Davos . Having said that his meeting with Secretary of State Kerry there had been "very good", Netanyahau casually added "I'm not going to remove even  a single settlement. I don’t intend to uproot any Israeli."  That seemed a very sharp turn to the right, an attempt to drive a king-size nail into the coffin of the diplomatic initiative led by the same John Kerry.

Washington has not made an official response, but could have hardly been very pleased. Two days later, a Netanyahu aide called the foreign correspondents in Israel and provided a clarification. True, the PM is not going to remove any settlement, but that does not mean that all the settlements must remain under Israeli rule. "There should be an option to leave Jewish residents in the territory of a future Palestinian state. Why can’t Jews live in Palestine, just as Arabs live in Israel?" Indeed, why not?

These comments were made in English, apparently designed primarily for an international audience, and were published by the Associated Press. However, in today's media it takes very little time to translate into Hebrew what was published in English. The extreme rightists were astonished and shocked and felt betrayed. "A very grave matter, a panicked loss of values​​" accused Minister Naftali Bennett, leader of the Jewish Home Party. For his part Deputy Defense Minister Danny Danon, a member of Netanyahu 's own party, said "We are absolutely not going to abandon the settlers behind enemy lines". It is clear that the possibility of Israel reaching peace with the Palestinians and they ceasing to be 'The Enemy" does not appear on the mental horizon of Danon and of the other heads of the nationalist Right, competing with each other in verbal outrage.

All this is not a real a surprise. Palestinians are committed to the principle of Sumud, which means holding on tooth and nail to your land, remaining hold on to your city or your village, remaining at all costs in your home at your town or village, whoever is the ruler there and even if it is an occupying and oppressive rule from which you greatly suffer. But the settlers who streamed into the Occupied Territories over the past forty- seven years are made ​​of a different stuff. It is all very well to return to the Land of Our Forefathers and settle in the Land of Israel. In Judea and Samaria, but only provided that IDF soldiers will always be around and provide settlers with guard services around the clock . Except for unique individuals such as the late Rabbi Menachem Froman and his handful of disciples, the settlers will not seriously consider the option of staying on and making a life in Palestine.

To those who know Twentieth Century history, the latest Netanyahu tumult  immediately brings to mind the name of French President Charles de Gaulle . In 1962, de Gaulle was faced with a dilemma in many ways similar to the present situation of the State of Israel. At the end of a harsh bloody war, de Gaulle came to the inevitable conclusion that France had to terminate its long-lasting  rule in Algeria and allow its Arab residents to establish an independent state. But what to do with nearly million and a half French settlers who lived in Algeria, some of them fourth- and even fifth generation? Had de Gaulle ordered an eviction by force, with soldiers physically picking up each and every settler and carrying them on board a ship sailing to France, the entire French army would not have been enough for the task. Instead, de Gaulle just set a date for the evacuation of French troops and the transfer of control to the government of the new Algerian state, leaving to each individual settler the personal choice  to stay or to leave. In practice, almost all of them chose to leave Algeria behind them and start a new life in France. (Later, some of them became hard-core supporters of the Le Pen extreme right, but that's another story…)

So, have we finally gotten an Israeli de Gaulle, and is his name Binyamin Netanyahu? N., an old Palestinian friend who managed to get permission to come to Tel Aviv just in the middle of this turmoil, was quite skeptical: "Between Algeria and France there are hundreds of miles of sea. When  the Algerians saw the soldiers boarding the ships and sailing off, they knew that their occupation had really ended. But there is no sea between us and Israel. If the settlers remain on our land, it will be enough that they make some problem or provocation, and immediately the army will return and the occupation will start again one day after it ended. There is no problem about Jews living among us as Palestinian citizens, we will respect them and they will respect us, but Netanyahu demands that they will live there as Israeli citizens " - "There are Israeli citizens who live in New York under U.S. law and the jurisdiction of the American police. " "Yes, in America. But we are not America. We remember Oslo, we know that if there is an agreement with holes in it then Israel will go through the holes and do whatever it wants. What Netanyahu means is that the situation will remain as it is now. A settler can go wherever he wants and commit whatever crime he wants right in front of a Palestinian policeman and the policeman can’t touch him. Only an Israeli police officer has the right to  arrest him, but the Israeli police will not do it, either. If that's how it is going to be, then what kind of a state will we have? A joke, not a state."

Indeed, another memory comes to mind.  In 1978, PM Menachem Begin promised to withdraw from the whole of Sinai in return for peace with Egypt , but played with the idea of keeping the Israeli settlers in northern Sinai in place under Egyptian rule. At first, Egyptian President Anwar Sadat did not reject the idea out of hand - until Begin made clear he did not mean only civilian Israelis to stay on in Sinai, but also an armed Israeli defense force which would have been charged with protecting them. From that moment, Sadat firmly insisted on the Israeli government evacuating each and every settler.

Today’s papers carry a new clarification from Netanyahu's bureau. It turns out that all this had never been a serious proposal intended for actual implementation. It was just “spin”, part of the endless 'blame game’ with the Palestinians, a proposal designed to be rejected by the Palestinians and thus allow Netanyahu to present them as rejectionists and extremists. " Bennett has spoiled our spin " the Netanyahu aides bitterly complain…