Five minutes to twelve, and no Plan B 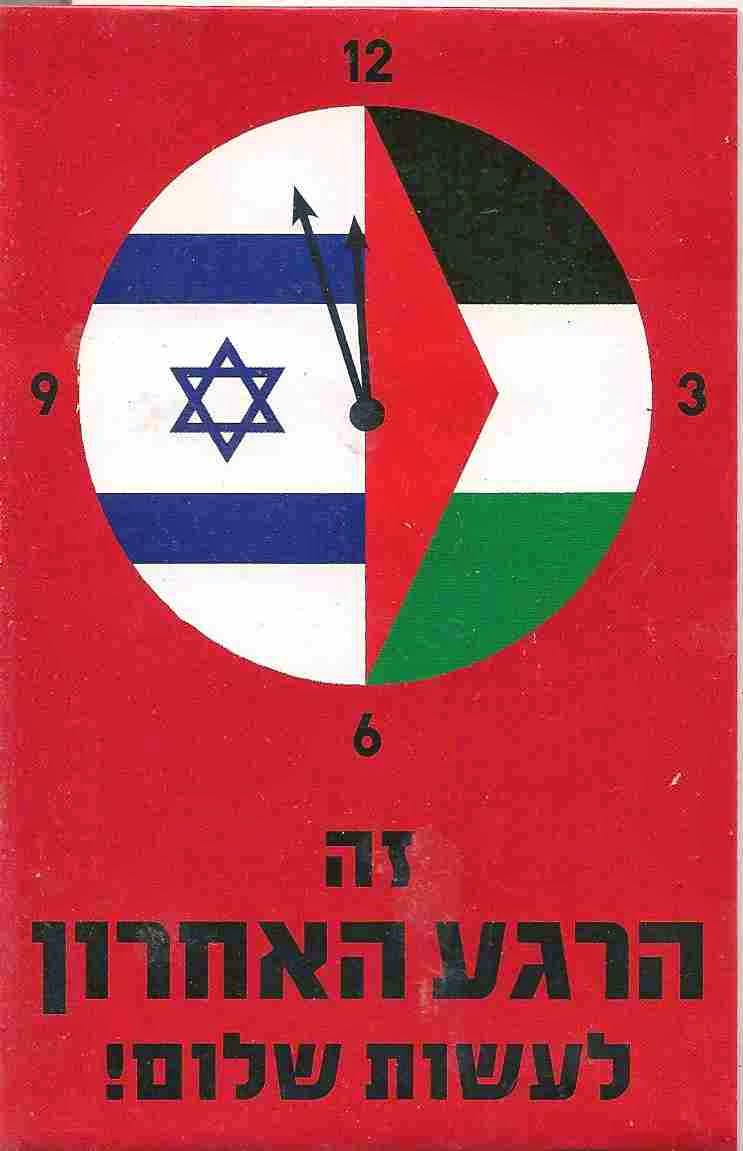 Apparently our pessimism came a bit early. The fact  is that recently we found a box full of these stickers, and concluded that they can still be used and distributed, i.e. that the hour of Midnight referred to has not yet come upon us. But now we might well be standing on the very threshold. If the diplomatic effort led by Secretary of State Kerry fails definitely - and according to  President Obama, the chances of its success are less than fifty percent - will there be any more chance for whatever process aimed at achieving peace between Israelis and Palestinians? Will anyone try again?

According to media leaks which came out this week, during Kerry's recent visit to Jerusalem he was closeted for no less than seven hours with Prime Minister Netanyahu. People sitting outside the closed doors could hear the echoes of shouting from inside. Kerry then decided to postpone his next visit to the region, which had been scheduled for January 13 , without setting a new date . It was then that Netanyahu announced his determination to Israeli rule over the settlement of Beit El “and the block of settlements around it”, which would require a series of Israeli-ruled enclaves and corridors severing the Palestinian territory and cutting Ramallah off. And he also wants to hold on to the settler enclave in the middle of Hebron, which would mean another series of deep cuts into the Palestinian territory. In total, his claims amount to 13 % of the West Bank, and he is definitely not ready to give the Palestinian in exchange an equivalent amount of land within Israel’s pre-1967 territory. All this, without taking into account the demand for continued Israeli military control over the Jordan Valley…

But… Netanyahu had in this week also some good moments, during the visit of Stephen Harper, Prime Minister of Canada. Harper has made every effort to show himself a true friend of the Prime Minister of Israel - and firmly rejected any attempt by journalists to hear from him any word of criticism regarding the Israeli construction of settlements. Right-wing newspapers and commentators were delighted, and complained that the Israeli television networks did not broadcast in full the wonderful Zionist speech which Harper made in the Knesset.

Netanyahu would have certainly been happy had it been possible to move Stephen Harper southwards and install him in the White House in Washington, or at least at Dawning Street in London or the Chancellery in Berlin. But those who look carefully could see that the great friend Harper does not in fact support Israeli settlements in the West Bank.

When reporters asked him, Harper replied "Our position on this issue is well known".  Indeed, Canada's official position was published by the Harper Government’s Foreign Ministry, a week before he departed on his way to our region. It included the statement that "Israeli settlements in the occupied territories are a violation of the Fourth Geneva Convention and constitute a serious obstacle to achieving a comprehensive, just and lasting peace". Also, that "Canada does not recognize Israel's unilateral annexation of East Jerusalem" and “Canada supports the Palestinian people's right to self-determination and the creation of a sovereign, independent, viable, democratic and territorially contiguous Palestinian state."  In short, a Canadian position not significantly different from that of the European countries whose ambassadors were summoned for a diplomatic rebuke at the Foreign Ministry in Jerusalem, just at the time for the Harper visit.

It was also at exactly the same time that a hundred Israeli captains of industry issued a grave warning of the damage which the Israeli economy might sustain should the negotiations fail: ”The continued conflict hurts all citizens in their pockets.  If Israel wants a stable economy, a good future and continued growth, we must reach an agreement. The world is beginning to lose its patience, and the threat of sanctions is becoming ever more imminent from day to day. We have a small window of opportunity with Kerry's arrival in the region, and it should be taken advantage of.”

Before setting off for the prestigious Economic Forum in Davos, Switzerland, where they are to take part in a meeting with Palestinian business people, some members of the group met with Netanyahu to make clear to him the severity of the situation. Smadar Barber Tsadik, CEO of the First International Bank of Israel, pointed out at the meeting that the largest investment fund in the Netherlands had severed all business ties with the Israeli banks, because these banks invest in the settlements. This actually crossed the line between a boycott of settlement to a boycott of the Israeli economy as a whole, an ominous precedent.

Netanyahu himself also flew to Davos , where among other things he had a new meeting scheduled with Secretary of State Kerry. In his speech he tried to display confidence and optimism, stating that there will not be a boycott of Israel - and even if there were, Israel will overcome it, “it would only encourage our inventiveness and entrepreneurship”. Reporter Gideon Kutz, who covered the event, wrote "Netanyahu was not at his best  in this speech. His appearance was not, for example, like the successful performances at AIPAC. There he was speaking to a King Bibi audience. In Davos he is wary of a hostile response.”

Veteran commentator Nahum Barnea noted two schools of thought in the Israeli political establishment. The optimists say that boycott calls emanate from a few radical groups which conduct an intensive propaganda campaign but so far did not cause significant damage to the Israeli economy. The pessimists think that irreversible processes are already set in motion, that the image of Israel as an Apartheid state has taken hold in Western Europe, and now "The virus is crossing the Atlantic to the United States. If the talks fail, it does not really matter on whom Kerry will cast the blame. As a result we might face  sanctions like those imposed on South Africa, Serbia, North Korea and Iran.”

On the other side of the political spectrum, columnist Hagai Segal - a former member of “The Jewish underground " which planted bombs in Palestinian cars and planned to blow up the mosques in Jerusalem – came up with an  interesting proposition: The State of Israel should forthwith establish a secret agency similar to Mossad, whose task would be to “act forcibly” against anyone in the word who dares conceive of boycotting Israel - an agency whose very name would “strike fear and horror among the anti-Semite boycotters”. Segal’s article in the "Makor Rishon" newspaper was illustrated by a drawing of a muscular bearded Jew punching a fat European in the face.

So far, at least, the Europeans are not intimidated. At a press briefing this week the EU Ambassador to Israel, Lars Faaborg-Andersen, made clear that the European Union, long seen as a ‘payer, not a player’, would no longer let its role as Israel's biggest trade partner and the Palestinians' largest donor be taken for granted. “If Israel were to go down the road of continued settlement expansion and were there not to be any result in the current talks, I am afraid that what will transpire is a situation where Israel finds itself increasingly isolated. While EU states are not advising firms to cut investments in Israel, companies might act unilaterally to avoid any backlash from clients increasingly disenchanted with Israel's presence in the West Bank.”

And the words of our Economy and Trade Minister, Naftali Bennett, only poured more oil on the fire. Bennett suggested that the government  bolster ties with emerging markets to offset problems with Europe. The EU Ambassador drily noted  that the EU is Israel's biggest economic partner, accounting for almost a third of the country's exports and imports, and that “it would be far from easy for Israel to change focus in a hurry.” Also the Palestinians were warned: “We made it clear to the Palestinians that they will gain nothing if they just sit back and wait for the negotiations to fail. We stressed to them also that the donor countries grow tired of the lack of progress in the peace process. If they think we will continue to foot the bill indefinitely, it is not realistic. If negotiations fail , there is no Plan B.”

If the negotiations fail, there is no Plan B…  We might really be just five minutes away from a lot of trouble.