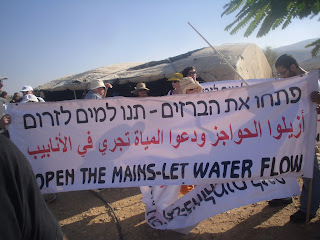 "Here at Fasayil, in the Jordan Valley, we get water twice a week," explained our host, to the group of activists from Tel Aviv. "Twice a week the water is flowing through this little water pipe which you see here on the ground, a pipe with a 20 mm diameter. When the large container is full we distribute the water among all the families, it has to last for three days. And by the way, we are more fortunate compared to the Palestinian communities more north. To them, Israel does not give any water at all, and often the soldiers even confiscate the water which they buy for themselves. That  is because the area where they live had been declared as a firing range, and the army says they are living there illegally. So far, they did not declare Fasayil a firing range. "

So what could we do about it – we, fifty Israelis who had followed the call of “The Water Coalition" and came to Fasayil  on a Saturday afternoon? We could say a few words of sympathy and encouragement, and express shame at the acts of the country whose citizens we are. We could take down from our bus the 120 bottles of mineral water which we brought with us as a completely inadequate gesture of solidarity. (The tanker which we intended to bring got stuck on badly paved roads, and came only the following day.) But at least a cardboard box full of toys was immediately assaulted by the Fasayil children with cries of joy. We could help build a simple playground from local materials and sit down with our hosts for a modest meal. And to raise big signs “Open the tap! Water is a right” towards the camera of the Social TV.  And then we got back on the bus and went back to our homes in Metropolitan Tel Aviv where the water is always flowing in the taps. Always.

Two days later, there were other visitors arriving at the village of Fasayil. In the morning, soldiers of the Israel Defense Forces came to Fasayil, accompanied by bulldozers. Two residential buildings were destroyed in less than half an hour. Twelve people, including seven minors, were left homeless.

Was that in any way related to our visit? Probably not. B'Tselem documents in recent weeks a sharp rise in the number of house demolitions carried out by the army throughout the Occupied Territories. At the Al-Moarjat community, also is the Jordan Valley, four residential buildings were demolished, leaving homeless 14 people, including two children. And five buildings were destroyed at the community of Umm al-Kheir in the South Hebron Hills, in this case leaving 27 homeless people, including 16 minors. And so on and so forth. Seven more Palestinian communities have gotten a destructive visit from the army in the past week.

The day on which  the soldiers and bulldozers came to the village of Fasayil in the Jordan Valley was also the day when Sima Vaknin, Director General of the Ministry for Strategic Affairs, attended an urgent session at the Knesset in Jerusalem. She informed the Knesset Members of a severe situation - "Israel is perceived in the world as a Pariah State". But hope is not lost. The Ministry for Strategic Affairs has established an ten-member inter-ministerial team, charged with formulating an alternative narrative, and Israel will make every effort to get it accepted by the world. The ultimate goal is to instill this alternate narrative globally during the next ten years, until 2025. "For me, victory means a narrative change in the world’s perception of Israel.  That the world will no longer equate Israel with Apartheid" she noted.

How exactly is that to be achieved? Vaknin, who until a few years ago served as the Chief Military Censor, refrained from providing Knesset Members with any detailed information. "The fight against the de-legitimization of Israel is a very sensitive topic. I'm pushing the ministry to work in utmost secrecy, and I asked for the minister in charge, Gilad Erdan, to refrain from public statements regarding the work of the ministry. We want most of the work of the Strategic Affairs Ministry to be classified. There are very many sensitivities. I can’t even explain in an open forum what these sensitivities are... Much of what we do goes under the radar. I can explain in detail only at a close session of the  Foreign Affairs and Defense Committee, with an absolute prohibition on publishing anything said there. All I can say here is that the operating budget on the campaign against de-legitimization of Israel comes to 128 million in 2016. "

Still, some of the methods to be used were exposed two days later. Strategic Affairs Ministry officials held a work meeting with their colleagues from the Interior Ministry and the Interior Security Ministry, and informed them that "Dozens of international organizations are active on  the West Bank, under various guises. They are gathering information on IDF operations in the Territories. Foreign activists then make use of this information to promote a boycott and isolation of Israel. Boycott-supporting activists are agitating Palestinian residents of the West Bank, inciting them against the IDF forces and disrupting military operations.” It was  estimated that “there are several hundred such foreign activists, who enter either through Ben Gurion Airport or via the Allenby Bridge, and pretend to be tourists. Some activists are leaving after a short stay, but some remain in the West Bank for long periods".

Therefore, Ministers Gilad Erdan and Aryeh Deri resolved to establish a joint team tasked with preventing such activists getting through passport control and expelling those who already managed to enter the country. Among other things, the team will collect intelligence on foreign activists who are in the country in order to establish a judicial case justifying their deportation. Also examined by the team’s legal advisers is the option of "criminalizing" entire organizations, so as to be able to deport or deny access to anyone who is a member with no need of gathering specific evidence against each activist separately.

On the pages of "Israel Today" (aka the Bibinews) Itai Reuveni spelled out  who is meant: "For a long time, various agencies are sending to Israel extremists disguised as tourists, in order that they will document ‘Human Rights violations' [quotation marks in the original].

“The most blatant example is the Ecumenical Accompaniment Program in Palestine and Israel, a project founded in 2002 by The World Council of Churches. Its declared purpose is to bring volunteers to ‘experience life under occupation and influence the International Community's involvement in the conflict’. This project is sending activists from dozens of countries for a period of three months, after a training in their home country which includes ways of dealing with the military and briefing to get into Israel. When arriving, they get a further briefing and then go into the field, wearing brown vests with the program logo. They are deployed at the crossings and points of friction, and even in the Old City of Jerusalem, and make one-sided documentation of  alleged Israeli violations. At a peak moment activists positioned themselves at the Wailing Wall and documented the security forces’ activities. At the end of three months, many activists return to their home countries and promote various anti-Israeli campaigns at the explicit request of the program managers. An end should be put at last to the activity of this and other organizations of the same type such as the International Solidarity Movement (ISM) and The American Friends Service Committee of the Quakers, who until now got humanitarian visas."

This morning, the radio news reported that the French Government condemns the demolition of buildings in Nabi Samwil, north of Jerusalem, whose construction was financed by France. “It is the third time this year that Israel is destroying or confiscating humanitarian aid structures which were erected by France, including a school which was destroyed six months ago. The increasing pace of demolition  is in contravention of International Law.”


Perhaps the French Ambassador should be expelled, too? 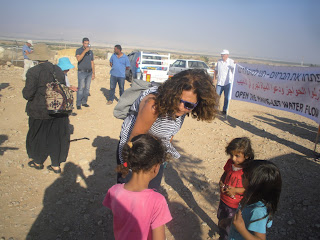 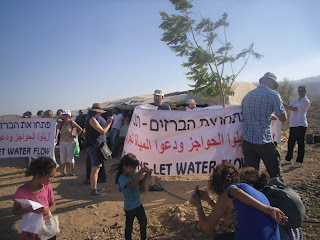 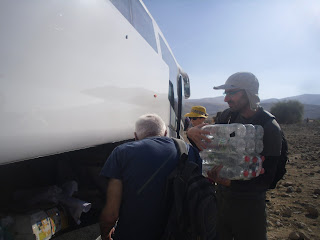 Posted by Adam Keller אדם קלר at 3:00 AM