Negotiating with a gun to the head

In the latest offensive of Israeli ministers against  U.S. Secretary of State John Kerry, worldwide  attention was given to the words of Yuval Steinitz,  the man who came down from the ivory tower of the Haifa University  Philosophy Department and is at the moment the ‘Minister of Strategic and Intelligence Affairs’. " It is unacceptable to force Israel to negotiate with a gun to the head, with the Palestinians hearing that in case of failure of the talks The State of Israel would be hit by an international boycott."

Two days before the philosopher-minister protested against the intolerable conditions under which the government of Israel is required to negotiate, IDF soldiers, accompanied by bulldozers arrived at the tiny village of Ein ​​al Hilweh in the northern Jordan Valley, and in a single hour razed it to the ground. Ein El Hilweh had been destroyed several times before, but this time it seems that policymakers are determined that it will not be rebuilt. The Red Cross was explicitly forbidden to provide tents to the sixty-six villagers who were left homeless, among them thirty-six children, and the military made clear that any tent found on the ground would be immediately confiscated. One villager asked the soldiers the desperate question "But where shall we go?" A soldier pointed toward the town of Tubas, one of the Palestinian enclaves defined under the Oslo Agreements, not part of the Jordan Valley which is to remain under long term Israeli control. 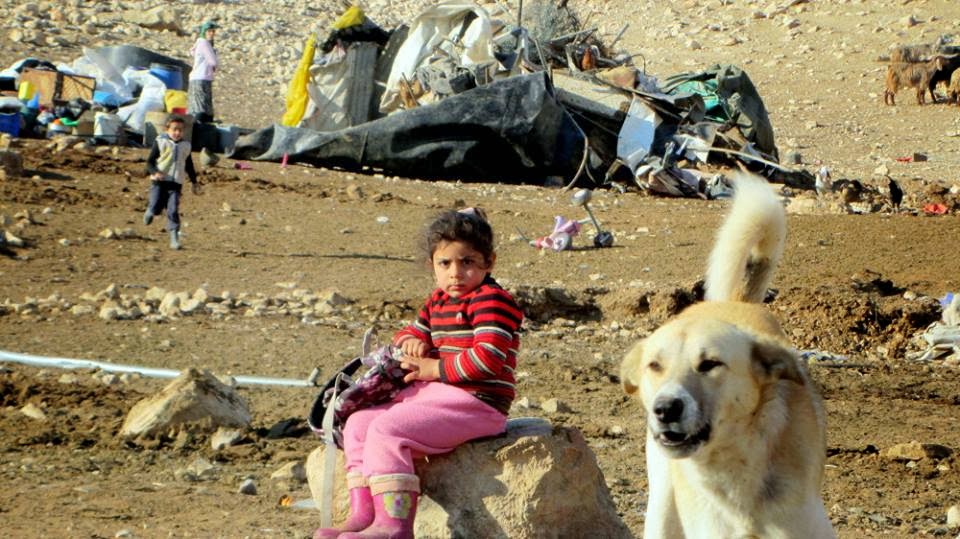 This was not the first or only case of its kind. For many years, the State of Israel has an policy to prevent the entry of Palestinians into the Jordan Valley if they don’t live there, and to destroy the homes of those who do live there. When the Jordan Valley became a major bone of contention in the  ongoing negotiations, the pace of Palestinian home demolitions in the same region greatly increased. 172 Palestinian structures were demolished in 2012, 390 in 2013, and since the new year began 92 were already destroyed in one month alone. Such are the conditions under which Palestinians are required to conduct negotiations on the future of the Jordan Valley .

Palestinians had more than once complained that they were required to negotiate with a gun to their heads, but this did not gain much attention in any media. As is well known, the media looks for man-bite- dog and not vice versa. In the endless rounds of negotiations spanning over twenty years, the Palestinians faced across the negotiating table an interlocutor maintaining full control on the ground and in no hurry to give it up, an interlocutor whose fleet of bulldozers is tirelessly engaged in the demolition of Palestinian homes and in preparing the ground for the expansion of Israeli settlements. In each round the Palestinians are presented with a choice:  to accept what is offered to them - or to face the prospect that the occupation which had already lasted for decades will go on for further decades.

On several occasions of this kind, Palestinians opted for the path of armed resistance. But then they were exposed to the blows of the most powerful army in the Middle East, and in the international public opinion they were presented as terrorists who reject peace. In other cases the Palestinians tried again to proceed through negotiations, and once again found that "Israel is conducting negotiations on the future of the pizza while eating it", in the words of veteran negotiator Saeb Erekat,

Since the days of Kissinger,  the United States had been the sole and exclusive mediator between Israel and the Arabs, and the other partners in the “Middle East Diplomatic Quartet” - Europe, Russia and the UN - were relegated to little more than a decoration .

Even when the rest of the world supported the Palestinians, the Government of Israel could afford to ignore it as long as it had the solid support of America. When the Secretary of State voiced too many complains and demands, it was worthwhile to check if the President truly backs the Secretary.  (Remember Colin Powell and George W.) And if the President  fully backed the Secretary of State, there was still AIPAC to provide a majority in the Senate and the House with standing ovations for any visiting Israeli Prime Minister. And the United States holds elections every two years, and candidates always need the support of the lobby, and campaigning lasts for nearly a year, so that an Israeli government just needs to get through the year between elections. Thus the four years of Barack Obama’s first term passed with nothing changed on the ground except for a significant increase in the number of Israeli settlers.

But "the bastards changed the rules."  At some point in the last year, the Europeans  ceased to be a decoration and became key players. Secretary of State John Kerry, along with EU Foreign Policy Chief Catherine Ashton and Chancellor Angela Merkel and other European leaders quietly paved a bypass road around AIPAC, and Netanyahu is suddenly facing difficult pressures even in an American elections year. At the Munich Security Conference,  Kerry warned that “The status quo between Israel and the Palestinians cannot go on. While there is prosperity and momentary security in Israel, it is an illusion that is bound to change if talks flounder. The risks are very high for Israel. People are talking about boycott. That will intensify in the case of failure. We all have a strong interest in this conflict resolution."

Is the United States going to impose a boycott? Is the United States putting pressure? God forbid: America is very much opposed to boycott. It is the Europeans who do the pressing and threatening. Talk to them, listen to them , Mr. Netanyahu , they are your country’s biggest trade partner. “The Third Intifada had begun. It started in the Europen Union” wrote the influential commentator Thomas Friedman.

The opinion poll published this morning by the Sofhashavua weekly indicated that some 70% of Israel's citizens no longer regard the U.S. as an honest broker. (Probably even now, there would be a higher percentage among Palestinians...) And, 67% of Israelis citizens are concerned that a European economic boycott might directly hurt them and their families.

Negotiations never take place in a vacuum. Developments around the table always reflect the military, political and economic balance of forces, the two parties’ ability to threaten each other and hurt each other. History has known two types of negotiations which mark the end of wars and conflicts. When only one party is required to negotiate with a gun to its head, it is negotiating terms of surrender. Only if both parties to the negotiations feel threatened, it might  be possible to eventually reach an agreement whereby both parties gradually lower the gun aimed at the other’s head and gradually build peaceful relations.
Posted by Adam Keller אדם קלר at 2:05 PM